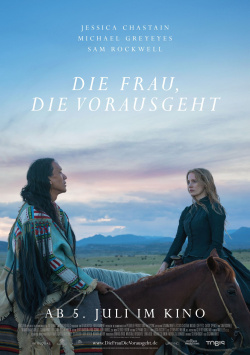 The Woman Who Walks Ahead

A year after her husband's death, New York painter Catherine Weldon (Jessica Chastain) decides it's time for a fresh start. And so she decides to take a trip to North Dakota - not exactly a place a woman should go alone in 1889. But Catherine is determined to portray the legendary Sioux chief Sitting Bull (Michael Greyeyes). With her self-confident and open-minded nature, however, the young woman does not go down well in the Wild West. Colonel Groves (Sam Rockwell) in particular finds her sympathy for Sitting Bull and the other Native Americans a thorn in the side. But even as her romantic notion of the West is shattered by harsh reality, Catherine refuses to be intimidated - until she becomes part of a battle for nothing less than the freedom, independence and survival of the Lakota Sioux.

The Woman Who Walks Ahead blends fiction and history to create a gripping Western drama. The model for Catherine Weldon was artist Caroline Weldon, who painted Sitting Bull's famous portrait in 1890 and became his close confidant, interpreter and secretary. Screenwriter Steven Knight took so many liberties in telling her story that this is neither a biopic about Weldon nor a historical film. Rather, the whole thing is based only very, very loosely on true events, so that even the first name of the main character had to be changed from that of the real role model.

However, even if director Susanna White has not delivered an accurate history lesson here, she has succeeded in creating a very gripping western drama overall, which lives from strong actors and atmospheric images - and incidentally shows in an unobtrusive yet very shocking way that we have made far too little progress when it comes to equal rights or dealing with prejudice. For the story told here may be set some 130 years ago, but it has some startling parallels with the present.

The somewhat too sustained narrative pace repeatedly slows down the inherently gripping dramaturgy. But White's production can hold its own with a successful mix of sensitive character development and strong snapshots. The Woman Who Walks Ahead may not be mass entertainment cinema. But as a stirring portrait of a woman who won't let her ideals be destroyed by a world dominated by violence and men, the film works really well. And that's why - with a few small point deductions - it definitely gets a: Worth seeing!

Cinema trailer for the movie "The Woman Who Walks Ahead (USA 2018)"
Loading the player ...