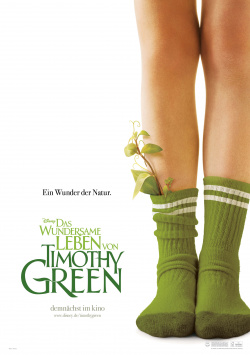 The Wondrous Life of Timothy Green

Cindy (Jennifer Garner) and Tim Green (Joel Edgerton) lead a quiet life in the small town of Stanleyville. Although the economic situation of the town is very tight and the two are not really rich, there is really only one thing they are missing to perfect happiness: a child. But unfortunately this wish remains unfulfilled. When Cindy and Tim come to terms with the fact that they can't have children, they bury their wish in a rather unusual way. They write down all the qualities they would have liked their son to have and bury them in the garden. But then something incredible happens: after a violent storm in the night, a strange little boy (CJ Adams) suddenly appears in their house, seemingly having climbed straight out of the hole where the couple had buried the box with their wish notes. But that's far from the most unusual thing Cindy and Tim will experience in the days to come.

The Wondrous Life of Timothy Green is Peter Hedges' third directorial effort by now. Whether as a writer (Gilbert Grape, Somewhere in Iowa), screenwriter (About a Boy) or, indeed, director (Pieces of April), Hedges has always demonstrated a knack for sensitively told stories with heart and humor. This story about an unusual parenthood and a boy who permanently changes the lives of the residents of an entire small town is again filled with very likable characters and charming ideas. But these are almost completely smothered by an overdose of kitsch and clichés, which significantly diminishes the family film's entertainment value.

Whether this is due to Disney's influence is up to debate. The fact is that the story, which is magical at its core and also beautiful, lacks any originality. The dramaturgy bristles with predictability and clichéd character sketches. And the political corectness, which is beaten on the viewer with a sledgehammer, just seems embarrassing and not touching at all, especially in the final scene. Granted, Hedges wraps the whole thing up in very nice pictures, which sometimes radiate a certain warmth, that you as a viewer can be lulled by with pleasure. And also the acting of Jennifer Garner and Joel Edgerton (The Great Gatsby) is very charming in many scenes. But all that is endearing and worth seeing about the film is buried under a thick layer of sugar coating that is more likely to upset the stomach than to provide a comforting warm feeling in the region of the heart.

Another problem is that Timothy just doesn't have the same effect on the viewer as he does on the people he charms with his very special way. Although young actor CJ Adams goes out of his way to make the boy seem endearing in a cranky way, the biodegradable good luck charm just comes across as too weird and overly cute that any form of naturalness is lost as a result. True, there are a few very nice moments that arise from Timothy's maladjusted nature, such as his first meeting with Cindy's bitter boss. But for every successful, funny, or poignant scene, there are at least two moments of unbearable cheesiness or lack of content, so the negatives end up clearly outnumbering the positives.

As simple, harmless family entertainment with no big surprises, beautiful imagery, some nice characters, and funny moments, The Wondrous Life of Timothy Green works quite well. If you like to be moved to tears by manipulative kitsch and just want to escape reality for two hours, this is certainly a good movie for you. But more could have been expected from Peter Hedges, more originality, more bite and less intrusive morality. Here the film exaggerates it simply too much, so that it is at the end with the best will only for a conditionally worth seeing enough!

Cinema trailer for the movie "The Wondrous Life of Timothy Green (USA 2012)"
Loading the player ...