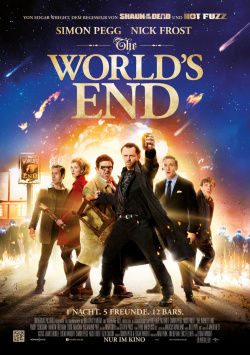 The dream team Edgar Wright, Simon Pegg and Nick Frost have teamed up again to bring their so-called Cornetto trilogy to a close after Shaun of the Dead and Hot Fuzz. The result of the renewed collaboration of the three is called The World`s End and is once again a wonderfully bizarre comedy, at which the fan spirits may, however, - also due to false expectations - a little divide.

In the beginning, however, the enthusiasm should still be equally high for all viewers who also want the two predecessors. The story begins with rapscallion Gary King (Simon Pegg) heading out to round up his old clique. Ever since they tried to celebrate their graduation one night in 1990 with the legendary booze cruise The Golden Mile through all the pubs of the small town Newton Haven, but failed shortly before the home stretch at The World`s End, there is only one dream for Gary: he wants to finally conquer the Golden Mile once. But while he remains the same child-head he was over 20 years ago, his former mates Andy (Nick Frost), Oliver (Martin Freeman), Steven (Paddy Considine) and Peter (Eddie Marsan) have long since developed into responsible adults. And so it takes a very special ruse to lure the foursome to Newton Haven and persuade them to revive the booze cruise. But even after the first few beers, there is no question of a relaxed evening among friends. The relationship between Gary and Nick is too tense, too many things from the past are still unresolved. But then something happens that turns this trip into the past into more than just an attempt to save old friendships - because suddenly the fate of all mankind is in the hands of the five men.

That The World`s End belongs in direct connection to Shaun of the Dead and Hot Fuzz is besides a few very nicely interspersed similarities (Cornetto, jumping over fences) especially in stylistic terms very obvious. Fast, sometimes somewhat absurd cuts, which are used for example when beer is consumed, are one of the unmistakable trademarks of this very special trilogy. But also dramaturgically this film fits perfectly next to its predecessors, as this story also takes a bizarre turn after a rather ordinary beginning, culminating in raw violence. Despite the many similarities, however, there are also some very distinct differences that some fans may well take exception to.

The biggest difference is the relationship between the characters played by Simon Pegg and Nick Frost. Although the two have not played typical heroes in previous films, but have always embodied child-heads, egoists and losers, they have always been sure of the audience's sympathy, especially since there has always been an infectious friendly chemistry between them that has made their characters so endearing despite their flaws. It's different here. Gary is amusing, no question, but he's anything but a genuine likable character. Friendship hasn`t existed between him and Andy for a long time, which until the last 20 minutes means that the film lacks the spice that usually comes from the interplay between the two actors.

In addition, the actual threat that the former drinking buddies have to face and the epilogue that concludes the film also offer two additional points on which minds are guaranteed to divide. Thus, unlike its predecessors, The World`s End is guaranteed not to generate collective enthusiasm. However, viewers for whom the film works will have a hell of a good time despite a few minor flaws. This very special end-times comedy is full of wonderfully bizarre moments, biting wordplay, a surprising guest appearance and grotesque fight and violence interludes that are responsible for many an eruptive laugh. Woe betide anyone who has just drunk heavily from his Coke.

The World`s End is admittedly the weakest part of the Cornetto trilogy overall. But the wonderful acting of the cast, with Eddie Marsan and Martin The Hobbit Freeman still deserving special mention, the perfect symbiosis of editing, music and comedic timing as well as the sometimes again delightfully absurd humour make this end of the world a really fun and absolutely worth seeing affair! Here's to another cold blonde!

Cinema trailer for the movie "The World`s End (Großbritannien 2013)"
Loading the player ...