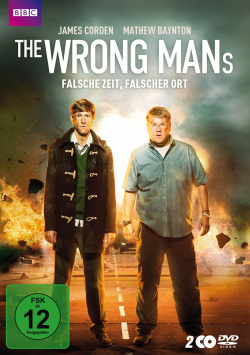 Film: Actually, Sam (Mathew Baynton), an inconspicuous employee at the city council, just wanted to drown his heartache. But the hangover the next morning is only his least problem. While he is still staggering to work, he witnesses a serious car accident. After the severely injured driver has been taken to hospital and the police has recorded his statement, Sam finds a mobile phone on the side of the road. Of course he believes that it must belong to the driver and so he doesn't hesitate to take off when it rings. But when he hears the words "If you're not here at 5 o'clock, we kill your wife", his helpfulness gives way to full-grown panic - especially since the mysterious caller doesn't let himself be convinced that Sam isn't the owner of the cell phone. He is persuaded by the mail distributor Phil (James Corden) not to call the police, but to save the woman on his own. And before he knows it, Sam is in a murderous adventure together with Phil, which takes on ever larger and more dangerous proportions...

"The Wrong Mans" is an extremely entertaining mini-series with lots of black humor, a wonderfully absurd thriller story and convincing actors. Especially Mathew Baynton and James Corden, who also wrote the scripts for the six episodes, are really great as anti-heroes. It's just fun watching them as the intimidated loner Sam mutates into a self-confident fighter against evil, while Phil, with his somewhat too big ego and cheeky mouth, seems to get the duo into even greater trouble time and again. The fact that the discovery of a mobile phone in the end mutates into a story about corruption, murder and conspiracy, in which secret services, politicians and contract killers are involved, raises the fun factor of the series several times over the three-hour running time.

However, besides the original idea and the good actors, the staging can also score points. She is visually very stylish, scores with a lot of tempo and harmonious cuts. However, there is also always time for some more quiet moments, in which the characters can develop well. Sure, but it's not always cliché-free. But whenever you have the feeling that the action is walking along well-trodden paths, you get an unexpected and mostly wonderfully bizarre twist, which often makes for a really hearty laugh.

This may all be very constructed, but it works really well due to the two main characters, the funny dialogues and the good tempo. And the ending is great, especially in view of the fact that a second season was far from certain at the time of shooting. Because the last scene works extremely well both as an extremely consequent conclusion of the story, and as a clever transition to a second season - whereby it's of course pleasing that there will be more episodes of the "Wrong Mans", which hopefully will find their way back to Germany.

James Corden, who recently celebrated a second career as a presenter of a late night show on American television, and Mathew Baynton have delivered a good mixture of comedy and conspiracy thriller with their series, which can score points both in terms of action and with dialogue wit and a little slapstick. An all around well done thing, that fans of british humor shouldn't miss out on in a wacky way. Absolutely worth seeing!

Picture + sound: For a current TV production, the implementation of picture and sound of the DVD is on a good to very good level. The very clean image has a decent overall sharpness, which only in the darker scenes shows small quality losses like a slight image gravel. On the other hand, the colour scheme is very positive, which makes the very special atmosphere of the series come into its own. The sound mixed in Dolby Digital 5.1 isn't really spectacular, but it has some sound effects like explosions, shots or tyre squeaks to offer some decent surround moments. This is absolutely satisfactory for a TV series. Good!

Extras: The best extra of the double DVD is undoubtedly the fact that each episode is accompanied by an (unfortunately not subtitled) audio commentary by the two main actors and series creators James Corden and Mathew Baynton together with their director Jim Field Smith. The casual conversations of the three are full of amusing and interesting details about the creation of the story and the shooting of the series. Besides the comments there is also a nice look behind the scenes on the second disc, which is pleasantly promo-free. Gut!

Fazit: "The Wrong Mans" captivates with two sympathetic main actors, one abstruse, yet surprisingly exciting story and lots of black humor. The three hours running time of this first squadron are flying by. Although the German dubbing is quite successful, the English original version has even more wit and bite and is therefore absolutely preferable. The DVD presents the series in good picture and sound quality and also offers entertaining audio commentaries and a nice look behind the scenes. absolutely recommended!