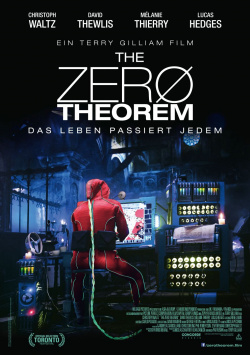 In a world dominated by computers, social networking and advertising, computer genius Qohen Leth (Christoph Waltz) lives in seclusion in the ruins of a burnt-out church. With luck, he's managed to convince his mysterious boss Management (Matt Damon) that he could work more efficiently from his home than in the noisy and hectic environment of his previous workplace. In his own little world, Qohen is tasked with solving the Zero Theorem, a mathematical equation that could solve the riddle of the meaning of life. Whenever he makes a big step forward in his efforts, however, he is interrupted, whether by his supervisor Joby (David Thewlis), the lascivious Bainsley (M&eacute;lanie Thierry), or Bob (Lucas Hedges), the eccentric son of Management. Soon Qohen begins to suspect that he is being purposefully prevented from solving the Zero Theorem. But Qohen is not so easily dissuaded from his task.

With The Zero Theorem, director Terry Gilliam delivers another very dystopian vision of the future after Brazil and Twelve Monkeys. Again, the whole thing is very playful and whimsical, but underneath this colorful and very peculiar surface, it again deals with very essential questions about life and about being human. No question, Gilliam offers his viewers again a lot for the eye. The set is simply magnificent and extremely playful - just as one is used to from the Monty Python member. But in his love for extravagant details Gilliam always loses sight of the story.

It is true that Gilliam is never about serving his audience everything openly on a platter. He requires his viewers to think, interpret and look beneath the surface. In principle, this is a very positive thing, especially since the combination of fascinating imagery and a multi-layered story can make a film something very special - as was the case with Brazil. But when the story seems to consist of fragments that don't want to fit together into a coherent whole, even the most bizarre designs and the best intentions behind the story don't help to entertain the audience well.

While the prerequisites for this are really good. With Christoph Waltz Gilliam has found a first-class leading actor, who embodies the contact-shy hermit in a cranky, but still extremely likeable way. And the rest of the cast, most notably Matt Damon and M&eacute;lanie Thierry, lift the film to a very high level in terms of acting. In addition, some set pieces of the story work very well on their own. These moments also stay with you for a long time. That the whole film fails to do this is a real shame.

Terry Gilliam, despite some major successes, was never really a filmmaker for the general public. His films are often quirky or very difficult to get into, such as the drama Tideland, which was only released on DVD in this country. In this respect, The Zero Theorem does not completely fall out of the familiar pattern. And so it can be assumed that loyal Gilliam fans will only be bothered by the somewhat confused story to a limited extent. For those who like the filmmaker for his eccentric visual language will love The Zero Theorem. But all other viewers will surely be quickly annoyed by this search for the meaning of life. And therefore: Only for fans with cutbacks worth seeing!

Cinema trailer for the movie "The Zero Theorem (England/Rumänien/Frankreich 2013)"
Loading the player ...