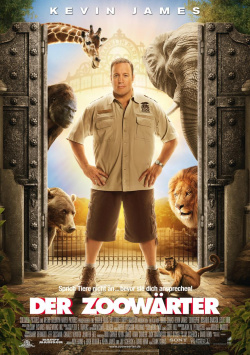 Kevin James seems to have summer written all over him. After topping the summer movie charts in recent years with comedies like Chuck & Larry, The Department Store Cop and Child's Head, he's now trying again to lure moviegoers to the theaters in droves as The Zookeeper.

In the animal comedy, the King of Queens star plays Griffin, a good-natured animal keeper who has found his absolute dream girl in Stephanie (Leslie Bibb) - until she sends him running for the hills during his romantic proposal, of all things. The love for his animals helps Griffin to get over this disgrace. But with the exception of his colleague Kate (Rosario Dawson), he won't let any woman get close to him again. But just when he seems to have got his life back on track, Stephanie reappears and makes it clear to him that he can have her back - if he gives up his job at the zoo. But the animals don't want to accept that so easily. And so they reveal to a completely confused Griffin that they can talk. And they already have a plan so that Griffin can stay zookeeper: he just has to learn the art of seduction and show his female who is the alpha animal. But this plan, of course, goes horribly awry.

Frank Coraci, who is responsible for Adam Sandler hits like The Wedding Singer, Waterboy, and Klick, stays true to his rather simple style infused with brute humor in The Zookeeper. And so he lets Kevin James constantly stumble through the scenery, fall down somewhere, run against something or he fires objects into his groin. Add to that a few fecal jokes from the animals, especially the monkey voiced by Mario Barth, and you have a potential hit movie. Originality or clever jokes are in vain, of course. But does that necessarily mean that Der Zoowärter is a bad film?

The answer is a somewhat vague no - at least not for the intended target audience. Since the film is clearly tailored to lead actor Kevin James and he also delivers exactly the kind of gags that his fans love, exactly those will then again get their money's worth. And also such - probably rather young - viewers, who can amuse themselves deliciously about talking animals, are served here on the best. The gags are by and large harmless and insult the intelligence of the audience only in a few moments. And the one or other really good laugh has then even crept into the script, such as when Griffin kidnaps the good-natured gorilla Bernie from the zoo and explores the Boston nightlife with him.

Admittedly, a really good comedy still looks different. That's because, as a viewer, you never get the feeling that the makers were really striving for originality. So if you expect more than harmless brute humor and cute, albeit somewhat cheeky animals, you will certainly be bitterly disappointed. But since at least fans of Kevin James and children are well entertained, there is still just a benevolent bottom line: Worth seeing

Cinema trailer for the movie "The Zookeeper (USA 2011)"
Loading the player ...