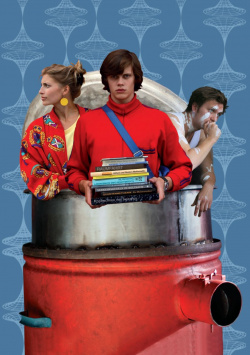 There are no feelings in space

18-year-old Simon (Bill Skarsgård) doesn't really get along with his environment. He'd much rather curl up in his old water barrel and dream of flying through space. There, at least, there aren't all those pesky feelings that make life on our planet so problematic. But in order for Simon to function on Earth, his life has to run according to very clear rules. Everything has to be perfect, otherwise Simon panics. And the boy won't let anyone touch him. Because Simon has Asperger's. And only his brother Sam (Martin Wallström) knows how to deal with this illness in such a way that Simon feels comfortable in his presence. But when the constant presence and the complete disregard for any personal boundaries becomes too much for Sam's girlfriend Frida and she leaves him, the otherwise so cheerful Sam falls into a deep crisis. And this is also felt by Simon, whose clear daily routine is considerably disrupted by Sam's depression. Soon it's clear to Simon: he needs a new girlfriend. Following clear, scientific rules, he sets out to find a suitable successor. When he meets the unconventional Jennifer (Cecilia Forss) in the process, Simon also learns about entirely new sides of life.

In Space There Are No Feelings is the feature-length version of an acclaimed short film made by Andreas Öhmann for Swedish television. Using the same actors, he has now stretched the story to feature length and the result was so compelling that the film was allowed to enter the 2011 Oscar race for Sweden. It wasn't enough for a nomination, but that doesn't make this charming little comedy any less worth watching. In addition to some parallels to the American Asperger's film Adam, there is also a touch of Elling running through the film. The typical Nordic humor makes the film absolutely likeable despite some weak points, which is also a merit of the main actors.

Bill Skarsgård, son of the great Stellan Skarsgård and brother of True Blood vampire Alexander Skarsgård, plays the young man with Asperger's slightly overdone at times, but all in all he delivers a likable and believable performance. However, Cecilia Forss deserves especially many sympathy points, who delivers an enchanting and refreshingly natural performance as the maladjusted Jennifer, through which the film can benefit enormously, especially in the last third.

Anyway, Öhmann hits just the right note with the finale. While he lets the viewer out of the cinema with a smile on his face, he holds back with too thickly applied happy ending feeling at the end. Of course, the ending is a typical cinematic fairy tale finale, but it still feels believable and simply beautiful.

In Space There Are No Feelings falls a little short of its potential in some scenes, while other aspects are almost too much of a good thing. In between, however, the humor and sentiment hit just the right note time and again, making this Swedish comedy a nice little film with a lot of charm that can be warmly recommended to friends of arthouse comedies. Worth seeing

Cinema trailer for the movie "There are no feelings in space (Schweden 2010)"
Loading the player ...