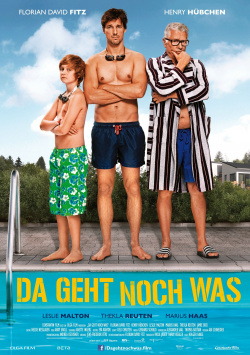 There is still something

A visit to his parents actually always ends with Conrad (Florian David Fitz) getting annoyed at his father Carl (Henry Hübchen), who constantly criticises him, and all attempts by mother Helene (Leslie Malton) to mediate fail. As a result, the successful businessman has avoided dropping by his old home as much as possible in recent years. But Mum's birthday is one of the few obligatory dates he has to attend by necessity. But this year the big surprise is not for the birthday boy, but for the annoyed son. During a dinner Helene tells him that she has left Carl after 40 years of marriage. Completely perplexed by this message, Conrad can't help but agree to his mother's request for an errand to his parents' house. But soon he bitterly regrets having accepted this assignment. For not only does he find Carl living in absolute chaos and bathing in self-pity. The jilted man also unceremoniously falls into the empty pool and injures himself. In this state Conrad can't leave his father alone, although his wife Tamara (Thekla Reuten) is already waiting for him and son Jonas (Marius Haas) at their holiday home. Of necessity, Conrad and Jonas have to camp out in Conrad's old youth room, and it doesn't take long before things start to crack up in this involuntary three-generation flat-sharing community.

With his cinema debut Da geht noch was, director Holger Haase has staged an amusing family comedy of a somewhat different kind, in which he confronts apparent egoists with cross-generational problems of the amorous kind. For love is a real mystery not only for the shy teenage son Jonas, but also for Papa Conrad and Grandpa Carl. So if you think you have all the answers to the questions that rob you of sleep and make your heart race at a young age, you're wrong. At the same time it is also a very charming father-son story, in which two stubborn people always stand in the way of their happiness and a harmonious relationship with each other.

This is not really new and is also told by Haase in a rather familiar manner. There creeps then also sometimes or other cliché into the dramaturgy and so some gag has a not to be denied recognition value. The fact that the film nevertheless works so well and seems pleasingly fresh over long stretches is thanks to a rather relaxed direction and an infectiously good-humoured cast. Henry Hübchen proves himself once again as the nation's current best stinker, while Florian David Fitz performs a successful grand hike between good comedic timing and believably more emotional moments. Even if the other actors are a little sidelined by the excellent interplay of the two, they also leave a consistently positive impression.

During this they have to play through some not so successful moments, in which especially the humor seems a little bumpy. But in the end a very positive overall impression prevails, which is also achieved by the fact that the very emotional turn of the story is not served with too much sentimentality. The fact that there's also a bit of humor shining through every now and then doesn't diminish the emotional impact of the last third. Quite the opposite: although it gets a little sad, the viewer is still released from the cinema with a very positive feeling. So Da geht noch was offers a total of 100 very enjoyable minutes, in which you can confidently overlook some small lengths and not quite successful scenes. A nice three-generation story, which can be recommended to all friends of German comedies of the not so silly kind warmly. Worth seeing

Cinema trailer for the movie "There is still something (Deutschland 2013)"
Loading the player ...