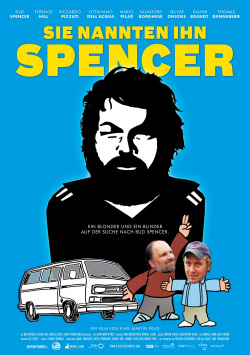 They called him Spencer

Carlo Pedersoli of Naples was a true multi-talent. He was an Olympian, lawyer, stuntman, politician, musician, inventor, fashion designer, aviation entrepreneur and screenwriter. But to most people today, he is still known as hard-hitting actor Bud Spencer. And for many, the master of the backpunch, who passed away in 2016, is still a great idol. His films, especially those he made alongside Terence Hill, have thrilled audiences in the millions at the cinema and still ensure good ratings when regularly broadcast on television. Nevertheless, there has never been a documentary film about this man and the phenomenon that is Bud Spencer. Karl-Martin Pold has now changed that with his first-class researched homage They Called Him Spencer.

The framework for this documentary, funded in part by crowdfunding, is the story of two great fans who set out to find their idol. There's Marcus Zölch, who years ago had a serious accident that broke his neck. Through the Bud Spencer movies, which he watched daily during this difficult time, he found new courage to face life and was able to walk again without any problems after just over a year. He is accompanied by Jorgo Papsoglou, who has been blind since birth. Jorgo, too, has learned through the Bud Spencer movies to face the obstacles life throws his way with laughter and a positive attitude. You take away from the two of them their love for the films and through them you also get a little insight into the incredible fan cult surrounding the Bud Spencer character.

The two are not actors, though, which is why many of the obviously posed scenes aren't really convincing. This has a certain charm at the beginning, but in the long run it seems a little bit tiring. But luckily director Pold was able to get Thomas Danneberg, Terence Hill's regular voice actor, to do the off-screen commentary, which was written by the incomparable Rainer Brandt, who is also responsible for the dubbing of numerous Spencer/Hill movies. These commentaries help the film get over some stilted moments and lengths. Still, a little tighter editing here and there would have done it good.

For fans, however, the film is still a gift. Because in addition to numerous film clips and rare photos, the documentary also offers interviews with numerous companions of Bud Spencer, including of course Terence Hill, actor Mario Pilar, screenwriter Marco Barboi, stuntman Ottaviano Dell`Acqua or composer Guido De Angelis (Oliver Onions). And who knows, maybe the two fans will even manage to spend a little time with their idol in the end. The producers are saddened that Bud Spencer did not live to see the premiere of this charming homage. But the fact that his son was extremely taken with this love letter to his father shows the team around Karl-Martin Pold that they have hit the right note here. Therefore: As a documentary film not without weaknesses, but as a tribute to a great film star absolutely worth seeing!

Cinema trailer for the movie "They called him Spencer (Deutschland 2017)"
Loading the player ...