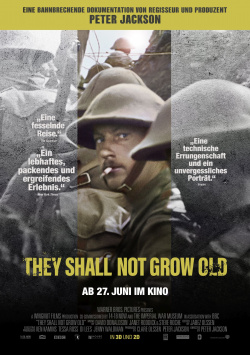 They shall not grow old

There are countless films and documentaries about World War II. But there is significantly less material about the conflict that shook the world between 1914 and 1918. Yet here, too, knowledge is important: Knowledge is important - against forgetting! But during the First World War, technology was still in its infancy, so there are comparatively few black-and-white recordings without sound in the archives. Young people in particular, who see such recordings, perceive this as a completely different world that has nothing to do with the one in which they live. And this despite the fact that the war was just 100 years ago. Oscar winner Peter Jackson has taken it upon himself and his team to use cutting-edge techniques to break down the barrier that is inevitably built up by the quality of the footage. The result is called They Shall Not Grow Old, a technically impressive and humanly deeply stirring documentary about the lives of young soldiers in a senseless war.

Actually, the whole thing was just supposed to be a 30-minute commission to mark the 100th anniversary of the signing of the Treaty of Versailles (June 28, 1919). But Jackson was so impressed with the footage and what his team was able to get out of it that, with a combined effort and a mini-budget for a short film, a feature-length documentary was created. The restored sequences were first carefully selected from hundreds of hours of original World War I footage from the British Imperial War Museum (IWM) archives. The image was then stabilised and cleaned before moving on to improve the sharpness many times over. The images were then colorized and converted using 3-D technology. Lip readers reconstructed what the men said on the old footage, which was then dubbed by British actors. The whole thing is accompanied by original commentary from the BBC's archives, which was voiced by World War I veterans.

This has made for a gripping, harrowing but in places surprising portrayal of the First World War, the likes of which have really never been seen before. Jackson himself said that his goal was to give the pictures back their humanity. And he succeeded brilliantly. At the beginning, the often very young men are completely fascinated by the camera, smiling and waving as they prepare for battle in the trenches. But by the time they've experienced the horror of war, they completely forget that the big box is filming them. Now it's just a matter of naked survival - and that becomes downright palpable for the audience.

There's a moment when They Shall Not Grow Old reveals the utter futility of war in a really striking way: When in the field hospital German and British soldiers fight side by side for the survival of their chambermates, but also their enemies, it becomes clear that those who have to fight the conflict and often had to pay with their lives, were not the ones who wanted this war in the first place. It is precisely because of moments like these that this documentary is an important film that should become required viewing in schools. Jackson himself hopes that he has done the technical groundwork so that many more archive recordings - not only from the First World War - will be restored and made accessible to the general public. Heavy fare, but in any case: Absolutely worth seeing!

Cinema trailer for the movie "They shall not grow old (Großbritannien/Neuseeland 2019)"
Loading the player ...