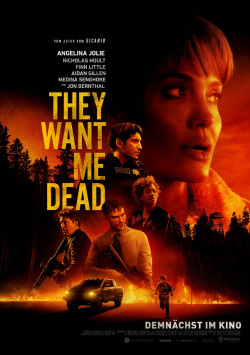 They Want Me Dead

Hannah (Angelina Jolie) is an experienced "firefighter" who bravely faces any danger, no matter how great, when fighting forest fires. But when she fails to save the lives of three people on one mission, it throws her completely off course. Working in the complete isolation of a watchtower in the Montana wilderness doesn't really do her any good, but Hannah doesn't care. But then something happens that forces her to come back to life: An obviously traumatized boy shows up on her turf. He's on the run from two merciless killers who killed his father and are now after his life, too, because the boy is carrying some information that could be very dangerous to powerful people. Now Hannah must help the boy get to safety before his pursuers catch him. But then a massive fire comes their way, cutting them off and becoming yet another life-threatening threat....

"They Want Me Dead" is the latest directorial effort from Taylor Sheridan, the acclaimed screenwriter of "Sicario" or "Hell or High Water" and creator of the highly acclaimed and hugely successful TV series "Yellowstone" with Kevin Costner, just released in the US. Sheridan always manages to combine extremely exciting stories, interesting characters and fascinating landscapes into a gripping whole. In "They Want Me Dead" he also manages to do this very well to some extent. But unfortunately, this time he doesn't manage to completely convince in any of the mentioned aspects. The story is promising and exciting in the beginning. But the realization is rather lousy. Especially towards the end the whole thing feels rushed. If you as a viewer is not told - so much is revealed as a spoiler - what information it is that has made the boy a target for the killers, then this is more than annoying.

The landscape shots are great, but the big fire scenes, which should actually look particularly spectacular, seem somehow cheaply implemented. "Backdraft" was much more convincing in its day. And then there are the characters, which are drawn very cliché-like. While Jon Bernthal and Nicholas Hoult manage to give their characters some interesting aspects, Angelina Jolie's performance remains surprisingly pale. She can't convince as a tough fire jumper without any courage to live. Too bad.

I have to admit that "They Want Me Dead" entertained me quite well in the first hour. But I was waiting the whole time for a dramatic climax that just didn't come. There was hardly any sense of the dual threat - killer on one side, forest fire on the other - for me. And the last few minutes just seem lovelessly written and directed. As a big fan of "Sicario" and "Yellowstone", I really expected more from Taylor Sheridan. Therefore, there is a "Seeable" only with significant deductions.