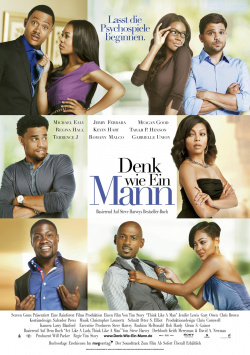 Dudes Dominic (Michael Ealy), Jeremy (Jerry Ferrara), Cedric (Kevin Hart), Zeke (Romany Malco) and Michael (Terrence Jenkins) are shocked: a man, successful comedian Steve Harvey, of all people, has written a book that reveals to women important secrets about the male sex and their tactics in dating and relationships. And women now seem to be using what Harvey reveals in his best-selling book against men. But the men of creation aren't letting the rudder get away from them in relationship matters that quickly. While Jeremy's girlfriend Kristen (Gabrielle Union) tries to make a real man out of her child boyfriend, Zeke's latest conquest Mya (Meagan Good) promises sex only after ninety days or Dominic's crush Lauren (Taraji P. Henson) seems to put more emphasis on a fat wallet than on depth of character, the men use the knowledge of Harvey's book and its effect on women to their advantage. And that, of course, is not without consequences.

Thinking Like a Man is, after He's Just Not into You or Why Men Don't Listen and Women Suck at Parking, another film based on a humorous relationship advice book. Directed by Tim Story, who already delivered a successful ensemble comedy with Barbershop, here again some couples are allowed to prove their sometimes more, sometimes less amusing shortcomings in amorous matters. And even if the film wants to appeal more to an African-American audience, especially in the USA, the director tries to tell his story rather universally and thus also address a broader, international audience.

However, he is confronted with two problems that could stand in the way of an international success of the film. Firstly, most of the cast as well as writer Steve Harvey, who also makes some small appearances in the film, are rather unknown in this country. So there are hardly any appealing names that could arouse the interest of the audience. Secondly, in order to make the comedy accessible to a wide audience, Story falls back on too many worn-out clichés to be able to generate really good laughs.

While there are some charming ideas and also some funny scenes. But the whole thing simply lacks bite and wit to be able to save itself from ultimately triviality. Really the film, which could bring in a respectable 91 million dollars in the USA and with it a multiple of its budget, is not bad. But for a comedy it's not funny and for a romance it's just not romantic enough. And so in the end the only conclusion is: nice - but as is generally known, nice is only the little brother of... let's call it quite nice trivial. But maybe I just think too much, like a man?