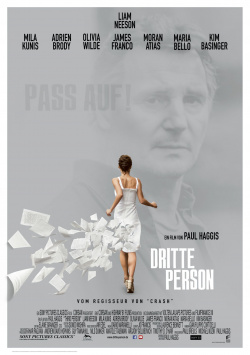 The once celebrated writer Michael (Liam Neeson) is stuck in a creative slump. He just doesn't quite want to succeed with his latest work. In a Paris hotel he hopes to find the necessary peace to finish the book. But when his lover Anna (Olivia Wilde) shows up, his emotional world is thrown into such turmoil that it is no longer possible to write sensibly. At the same time, American businessman Scott (Adrien Brody) is in Italy trying to steal the latest designs from major fashion houses. Just when his mission seems to be successfully completed, he meets the undercooled but extremely seductive Monika (Moran Atias) in a bar - an encounter with consequences that could change his life forever. Former soap actress Julia (Mila Kunis), on the other hand, is just trying to get her life back on track. This is incredibly important as she is about to be granted visitation rights to her son again. However, after a horrific incident in which Julia appears to be at fault, her ex-husband, successful artist Rick (James Franco) holds all the cards. As hard as Julia's lawyer Theresa (Maria Bello) tries, she seems to have long since squandered her last chance. Three stories in three cities that seem to have nothing to do with each other, yet are inextricably linked.

With Third Person, Oscar winner Paul Haggis has followed up L.A. Crash with another episodic drama whose individual storylines reveal their direct connection only at the end. It is true that the three stories have themes such as failed relationships, lost children or dark shadows of the past. But other connections are not apparent. Then, however, the storylines seem to intermingle. For example, Julia shows up in Michael's hotel room to clean - yet he's in Paris while Julia actually works in a New York hotel. And there's also suddenly a lot in common between Scott and the writer.

What it all means, the audience can only guess at the end. True, the staging here is not very subtle, especially in terms of symbolism. Nevertheless, much remains in the dark and one can only guess what picture is supposed to come out at the end of this sometimes arguably tough puzzle. The problem here is not that the film is too cerebral. Rather, this time Haggis just doesn't want to succeed in getting the audience emotionally involved in the stories. As good as the actors are, as engaging as the imagery is, and as well constructed as some scenes are, the overall construct feels undercooled and unwieldy. The story of Julia, for example, is in itself great emotional cinema, especially since Mila Kunis delivers a really intense performance. And yet it's just hard to sympathize with her and be swept along by her fate.

Third Person has very good moments, there's no question about that. The ensemble drama is also really interesting in itself, especially since the ending keeps it in the mind for a long time and encourages its own interpretations. However, there are too many lengths, too few really rousing scenes, which pushes the entertainment value of the episodic film down significantly. If you simply want to see good acting cinema in elegant pictures, you will undoubtedly get your money's worth here. But those who also hope for a consistently convincing and engaging story won't be able to do much with this work. Therefore: Despite a certain quality only conditionally worth seeing!