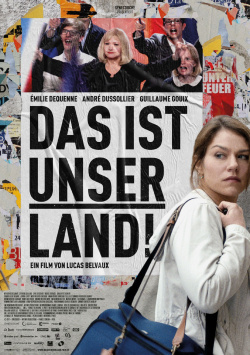 This is our country!

Every day, Pauline (&Eacute;milie Dequenne) is confronted with the problems facing the country as she works as a nurse for an outpatient care service in a small French town. Unemployment, poverty in old age, lack of prospects and the difficulties of integrating migrants are part of everyday life for Pauline. Despite this, the single mother of two children, who also looks after her sick father, always remains friendly and is therefore appreciated and liked by everyone. This is exactly what the populist RNP party wants to use for their purposes and recruits Pauline as a candidate for the upcoming mayoral election. After some initial doubts, Pauline lets herself be convinced that she can really achieve something for the people of her town as mayor. She doesn't seem to realize that she is only a puppet of party leader Agn&egrave;s Dorgelle (Catherine Jacob) in the process.

It is all too obvious that This is Our Country! is a film about, or rather against, Marine Le Pen and her Front National party. However, the subject matter can be applied to other countries, politicians and parties. Lucas Belvaux has created a very topical picture of our divided societies, which in some scenes absolutely hits the nail on the head. One moment in the film sums up the problem: when a man discovers that his wife supports the right-wing populist party, the two lash out wildly at each other. There is no factual discussion, no reason. And in the despair resulting from speechlessness, driven by pure emotion, the only thing left for the two is violence.

This may sound a bit exaggerated, but it is exactly the core of the problem: Reasonable, factual discussions, which we would currently need more urgently than ever before, are hardly possible anymore. Instead, generalisations, prejudices and populism dominate. And unfortunately not only on the side of those who belong to the right-wing spectrum. The film shows very well how clever minds exploit people's worries and fears to abuse them for their own purposes. It is absolutely understandable why Pauline sincerely believes she is doing the right thing and why she even stands up to her father because of it. The way targeted words are used to feign understanding for all that she has to witness every day in her job is really frighteningly well executed.

Unfortunately, the film doesn't always prove to have such a fine hand. At times, the whole thing is quite striking and uses extremes that are too clichéd. This is a pity, because it rarely becomes clear that there are no clear boundaries between right and wrong, but rather many shades, about which it is hardly possible to talk in the heated atmosphere. This is our country! is nevertheless an important film, even if it could have been a little more subtle and differentiated in places. But if it succeeds in persuading some viewers to face all the difficult issues that seem to be dividing our society at the moment with a little more reason and openness and to be less blinded by clumsy slogans and generalizations, then it will have absolutely achieved its goal. And that's why there is also a clear for this drama: Absolutely worth seeing!

Cinema trailer for the movie "This is our country! (Frankreich/Belgien 2017)"
Loading the player ...