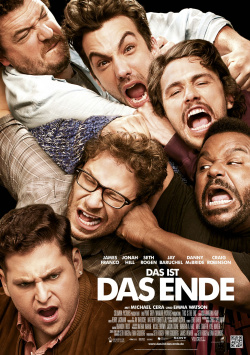 This is the end

In 2006, Seth Rogen and Evan Goldberg co-wrote a short film about the apocalypse with their buddy Jason Stone before their joint breakthrough with the screenplay for Superbad. The trailer-style short, directed by Stone, shows friends Seth Rogen and Jay Baruchel experiencing the end of the world together in an apartment. When the trailer, just 90 seconds long, was met with a great response on YouTube, the idea to turn the material into a feature film was quickly born. The result, the end-times comedy This Is the End, is now hitting theaters.

The basic idea was, of course, pumped up big time for the long version. Rogen and Baruchel now get active support from quite a few friends in the business. The story begins with Jay Baruchel, of Duel of the Magicians fame, visiting his buddy Seth Rogen in LA. Jay, who was looking forward to just hanging out with Seth, smoking weed and playing video games, is less than thrilled when he suggests going to a party at James Franco's new house. After all, Jay just can't get on with the superficial Hollywood drivel that one is exposed to at such parties. Nevertheless, he accompanies Seth, convinced that he will not have a very nice evening. But what horror really awaits him, he can not imagine even in his wildest dreams. For suddenly the apocalypse descends upon Los Angeles. The earth opens up and devours most of James Franco's illustrious party guests. Only Seth, Jay, James, Jonah Hill, Craig Robinson and Danny McBride survive the catastrophe. They hole up in the luxury home to escape the end-times horror unfolding just outside the door. But no one can escape the end of the world.

This Is the End is an end-times comedy, a story about friendship, a film about how people behave in extreme situations, and a delightfully self-deprecating look at Hollywood and its many outsized egos. It's sometimes raunchy and tasteless, sometimes surprisingly gory, infantile - and always damn funny. Sure, particularly profound humor shouldn't be expected here. There are minute-long arguments about masturbation, Seth Rogen shows in a very unsavory way how he quenches his thirst despite a water shortage and also demons with huge genitals and other, mainly below-the-belt gags dominate the action. And yet the whole thing works really well for long stretches.

One reason for this is that Seth Rogen and Evan Goldberg have surrounded themselves primarily with good friends for their joint directorial debut. This creates a very special group dynamic that somehow feels genuine despite the story being told in a completely over-the-top way. The chemistry between the actors is just right, which makes even the more awkward gags still work neatly. But the most important aspect of why this comedy is so much fun is the way the people involved here take themselves for a ride. Especially at the party that introduces the film, there are some quite wonderful guest appearances, with Michael Cera (Superbad, Juno) providing the best laughs with a performance so wholly against his image.

When Seth Rogen and James Franco make a low-budget sequel to their feature film Pineapple Express for laughs, when Emma Hermione Watson shows her particularly pugnacious side, when Craig Robinson sings a duet with Rihanna or Jonah Hill tries to connect with Jay Baruchel with an almost creepy friendliness, it's very hard not to have a royal laugh. And when the film comes up with absolutely decent effects for the low budget towards the end, there's also a bit of something for the eye.

No question, if you haven't liked the humor of Seth Rogen and co. so far, this isn't going to make you a fan. There should already be a certain soft spot for infantile gags to be able to have the fun that the film offers for over 100 minutes. True, even then not all the gags hit the mark and especially in the middle section there is the one or other length. But all in all, the end of the world is so entertaining that you will leave the cinema in a good mood after the wonderful final sequence. If apocalypse, then please like this! Worth seeing