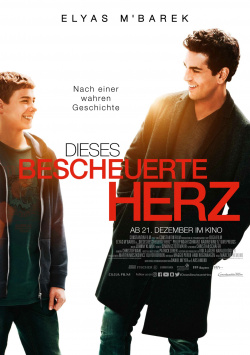 Lenny (Elyas M`Barek) enjoys his life to the fullest. Responsibility? A foreign word to him. Daddy will pay. But when Lenny drives his car into the pool at home after one of his countless party nights, his father (Uwe Preuss) has had enough. The successful heart specialist gives his son an ultimatum: he won't get paid again until he takes care of his patient David (Philip Noah Schwarz). The 15-year-old boy has had a heart condition since birth and could die at any time. At first, this is just too much responsibility for Lenny. But the more time he spends with the boy, the more he grows fond of him, and Lenny begins to realize that life is far too precious to waste it just like that.

Following the success of My Blind Date with Life, director Marc Rothemund has once again adapted a true story with a lot of heart and humor for the screen with This Stupid Heart. Again it is a story about friendship and about dealing with an illness, culminating in an infectious yes to life. In this case, the whole thing is based on the best-selling book of the same name, which journalist and author Lars Amend wrote together with Daniel Meyer, who has a heart condition. After Amend learned of Daniel's fate, he visited him and became his personal wish granter, so to speak. A true story that offers everything good cinema entertainment needs.

To follow the dramaturgical laws of cinema, however, the story was partially fictionalized. Lars Amed became Lenny, the irresponsible doctor's son, and Daniel became David, the patient of Lenny's father. These changes do create some clichés, but overall the story works very well even in its fictionalized form. Marc Rothemund is very good at filling what are in themselves very conventional set pieces in his production with a warmth and humanity that quickly transfers to the audience. Yes, it may be manipulative, which is intensified by the not-so-subtle use of the soundtrack. But it still goes to the heart.

Elyas M`Barek fulfills exactly the expectations his fans may have of him at the beginning, but then shows other facets in his performance that save his character from one-dimensionality. The chemistry between him and newcomer Philip Noah Schwarz is very coherent, which leads not only to some very amusing, but also to some emotional highlights of the film. Schwarz plays a little too hyper in some moments, though M`Barek does a good job of making up for it.

Overall, Dieses bescheuerte Herz offers good and moving cinematic entertainment. Even if the class of similar works like Ziemlich beste Freunde is not reached and some scenes are laid on too thick, there is for the beautiful story and the successful implementation clearly a: Worth seeing!

Cinema trailer for the movie "This Stupid Heart (Deutschland 2017)"
Loading the player ...