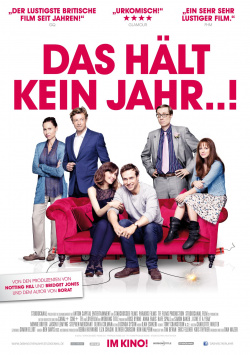 This won't last a year

It's love at first sight. When Nat (Rose Byrne) and Josh (Rafe Spall) meet, they realize they belong together. And so they don't flinch for long and are soon standing together at the altar. But it's not a very good omen when the priest's "I now pronounce you man and wife" literally sticks in his craw and best man Danny (Stephen Merchant) makes several mistakes in his speech. And so Nat's sister Naomi (Minnie Driver) is not the only one who prophesies that evening: "This won't last a year! And indeed, everyday life soon strikes with full force and reveals to the young married couple that they are more different than it seemed through the rose-colored glasses. Going to a couples therapist (Olivia Coleman) is supposed to close the gap between them, which is getting bigger by the day. But the appearance of handsome businessman Guy (Simon Baker) and Josh's ex Chloe (Anna Faris) don't make this desperate attempt at marriage-saving any easier.

This Won't Last a Year is the directorial debut of acclaimed comedy writer Dan Mazer, who has enjoyed particular success working with Sacha Baron Cohen on TV (Ali G Show) and in the cinema (Borat, Brüno). So there's probably no question that no well-behaved flowery romance should be expected from the man who shares responsibility for the most disgusting nude wrestling in film history. And indeed, the comedy does get down to the nitty gritty on more than one occasion. Dirty dialogues, below-the-belt humor and a very raunchy slide show might make some viewers blush - even if it's extreme embarrassment.

But surprisingly, the film works very well despite some humorous derailments. The laughs here are fired off by the minute, sometimes even by the second, and there's hardly a moment where there's even a hint of boredom. Certainly, there is no really high-level entertainment on offer here. But Mazer manages very well to mix crude moments with very charming and also romantic scenes to a really funny whole. His production doesn't only offer lewdness, but also a lot of heart. And this then successfully prevents the film from becoming a single embarrassment.

This, however, is not only due to the spot-on staging and the amusing script, but also to the well-chosen actors. Rafe Spall is a chaotic loser of the particularly likeable kind, while Simon Baker gets to exude plenty of tongue-in-cheek charm. Rose Byrne, after her great performance in Männertrip, also shows that she has comedic talent. Only Anna Faris doesn't leave much of an impression with her puckered lips and petrified facial expressions, and is completely upstaged even by actors in smaller supporting roles, such as Minni Driver or Olivia Coleman as a neurotic couples therapist.

The best laughs come from Stephen Merchant, who says some truly unbelievable things as arguably the worst best friend imaginable. Even if you're embarrassed by it, it's almost impossible not to laugh at Danny's embarrassing lines.

If you like the films of Judd Apatow (Virgin, 40, Male Seeks.) or the extraneous humour of Sacha Baron Cohen mixed with plenty of Bridget Jones romance, you'll have a deliciously good time with This Doesn't Last a Year. It may not be particularly sophisticated, but sometimes such uninhibited fun is just the thing for a relaxing evening at the movies. And that's why, despite some embarrassing moments, e gives it a more than deserved: Absolutely worth seeing!

Cinema trailer for the movie "This won't last a year (Großbritannien 2013)"
Loading the player ...