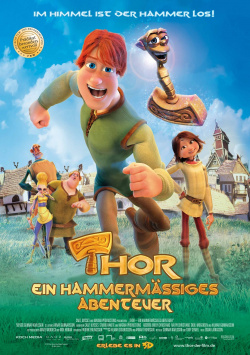 After the Nordic saga of Thor, the son of the gods, has been interpreted in a very unique way in the Marvel films Thor and Avengers, now comes with Thor - Ein hammermässiges Abenteuer a child-friendly animation variant from Iceland in our cinemas. In the 3D adventure, Thor is a frustrated teenager who is quite brave, but also extremely clumsy. Instead of being able to prove to his father, the god Odin, what a brave warrior he could be, he instead has to mend cauldrons or hammer saws straight as a blacksmith. But then a magical hammer falls into the boy's hands that not only can speak, but also has enormous powers that Thor could use to defeat the evil giants from the underworld who have it in for world domination. Odin and Goddess Freya, leader of the Valkyries, even come to Earth specifically to teach Thor how to use his new power. But when his best friend Edda is kidnapped by the henchmen of the evil underworld queen Hel, Thor sets out to meet the giants completely unprepared - a mistake he will soon bitterly regret.

Thor - An Awesome Adventure leaves a somewhat ambivalent impression. On the one hand, the film surprises with some blacker, but still kid-friendly humor, which doesn't always work in terms of timing, but isn't quite as cramped politically correct as many other animated films are. Whenever things get a little weird, this Thor provides some really good laughs. On the other hand, neither the animations nor the story seem really mature. While the landscapes and smaller details are animated quite excellently and are shown off very well especially with the 3D effect, the characters don't really seem appealing. The problem is that their appearance is too cramped for ugliness. It seems like the makers made it their goal to stand out from the character drawings of Pixar, Dreamworks, Disney and other major animation studios at all costs. Unfortunately, this doesn't come across as charmingly original, but simply shapeless and not really appealing.

The German Film and Media Review has given Thor - Ein hammermässiges Abenteuer a rating of Especially Valuable, on the grounds that the film would be entertaining and educational, especially for younger viewers. The entertaining can be agreed with without question, as the pace and action are well suited to the young target audience. To call the film educational, on the other hand, is really laughable, as the Norse mythology here is just as watered down and distorted as the Greek mythology in Disney's Hercules. This may be fun for kids, but it doesn't make it particularly valuable.

Directors Gunnar Karlsson and Oskar Jonasson have obviously gone out of their way to give little moviegoers an exciting and fun adventure with 3D effects that don't overwhelm and some quirky characters. On the whole, they succeeded well. However, the successful aspects are offset by several flat gags and the not particularly appealing animated characters. But for those who don't always want to see the Disney look, they can safely take their children to this version of Valhalla. Worth seeing with some reservations