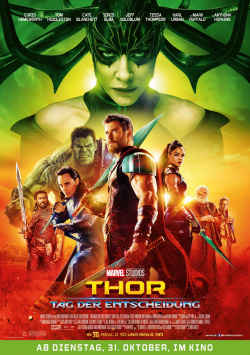 God of Thunder Thor (Chris Hemsworth) has a problem: The death of his father Odin (Anthony Hopkins) has freed his firstborn Hela (Cate Blanchett), goddess of death, from her prison. Now she not only sees herself as the legitimate heir to the throne, but also aspires to subjugate the entire universe for herself. This, of course, Thror must prevent. But in his attempt to get to Asgard before Hela, he ends up on the planet Sakaar. On this inhospitable garbage planet, he not only meets his half-brother Loki (Tom Hiddleston) again. He is also thrown into the gladiator arena by the Grandmaster (Jeff Goldblum), the ruler of Sakaar, to face the most powerful of all fighters. He's an old acquaintance, though: Hulk!

Probably spurred on by the huge success of the Guardians of the Galaxy films, Thor now gets to come across as more colorful and fun than his two predecessors in his third solo adventure. Thor: Judgment Day entertains with wonderful dialogues and wonderfully bizarre ideas, which the New Zealander Taika Waititi (5 Room Kitchen Coffin) has implemented with refreshing ease. The fact that the whole thing also works well in the more action-packed and serious moments is a testament to the studio's extremely good hand in choosing a director. But it's not just Waititi who has ensured that this has become Thor's best cinematic performance to date.

The actors also contribute significantly. Chris Hemsworth constantly lightens up the action with plenty of self-deprecation, while Cate Blanchett displays a playfulness as the diabolical goddess of death that has made Hela one of the best antagonists in the Marvel universe to date. Watching her try to summon Ragnarok - the twilight of the gods - is just plain fun. And then, of course, there's the delightfully weird Jeff Goldblum, the unbeatable Mark Ruffalo as Bruce Banner, and Tom Hiddleston, who has become the secret star of the Thor movies. Further supporting this already fine ensemble is newcomer Tessa Thompson, who fits much better alongside Thor than Natalie Portman, as well as Idris Elba, whose appearance, while brief, is more significant than in the previous films.

Admittedly, the film doesn't really offer much that's new. The effects are first-class, the pace is fast and the action is quite thrilling. But really big surprise actually offer only the amusing guest appearances, which of course should not be revealed here. Still, even if the story lacks originality, its execution does not. Thor: Judgment Day lives up to the genre of comic book adaptation in every way. The film is a colorful adventure that takes itself just seriously enough to avoid degenerating into a flat laugh riot. Taika Waititi has directed a great piece of cinematic fun, which has given its hero an extra jolt of coolness precisely because of its tongue-in-cheek approach to the genre. And Hulk has never been as great at the movies as he is here. Even if his solo films have so far failed to convince, he's literally unbeatable as a sidekick.

If you like the Marvel cinematic universe and appreciate the humor of the Guardians, you're guaranteed to love Thor: Judgment Day. For that, it definitely gets a: Absolutely worth seeing!