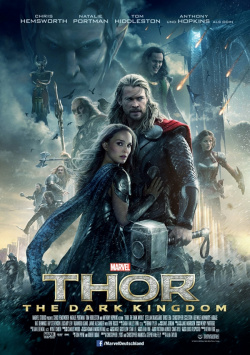 Actually, Thor (Chris Hemsworth) could sit back and relax. Not only has he, along with the rest of the Avengers, saved New York and the rest of the world from an alien invasion and taken down his brother Loki (Tom Hiddleston), who was responsible for it. For the first time, Thor and his men have also managed to bring peace to all nine realms. For his father Odin (Anthony Hopkins), this achievement is proof enough that Thor is a worthy successor to the throne of Asgard. But there's still one thing holding him back from being a good king: his feelings for mortal Jane Foster (Natalie Portman), who is still desperate on Earth for Thor to come back to her. In fact, a reunion between the lovers is imminent - but the reason is anything but romantic. For Malekith (Christopher Eccleston), an ancient adversary of Odin, has returned with his race of dark elves and threatens not only Asgard with deadly vengeance. He wants to plunge the entire universe into eternal darkness. Jane, of all people, seems to be the key to this. And so Thor must bring her to Asgard, hoping to protect her from Malekith. But when he realizes he's up against an all-powerful foe, he's left with only one way out to save Jane and the rest of the universe from the Lord of the Dark Elves: he must join forces with Loki, of all people.

After the Avengers and Iron Man 3 each grossed well over $1 billion at the worldwide box office, a heavy burden naturally rests on the shoulders of Thor, the son of the gods. His new big-screen adventure, also the second entry in the second wave of Avengers standalone films, will have to measure up to the entertainment value and financial success of his overmatched Marvel peers. And that's where Game of Thrones director Alan Taylor's film might have a bit of a tough time after all. It's not that Thor: The Dark Kingdom is a weak film. On the contrary. This sequel is a visually stunning and very entertaining fantasy film with great effects, good actors as well as a successful mix of action and humor.

What could stand in the way of the very big success with mass audiences, besides the fact that Thor is just nowhere near as cool as his colleague Tony Stark, is that Thor: The Dark Kingdom seems more like a science fiction film than a typical superhero flick for long stretches. Noise ships, aliens, alien worlds, all this offers the fantasy flick to a much greater extent, than its predecessor. Whereas most of the action of its predecessor took place on Earth, the focus of part 2 clearly shifts to Asgard and the other realms of Norse mythology. There's a lot of spectacle value in that, there's no question about it. But superhero movies without a clear connection to reality usually have a much harder time drawing crowds to the theaters than genre works like this that set their supernatural stories in a setting that is familiar and understandable to the audience.

So if you're prepared for Thor to only make a relatively brief stop on Earth, where he's also stolen the show by supporting actors Kat Dennings (2 Broke Girls) and Stellan Skarsg&aring;rd, you're in for a really good fantasy adventure with a decent fun factor. In addition to the sometimes really wonderful moments between Thor and the devious Loki, especially a small guest appearance of another Avengers and the brilliant finale in London provide a really good mood.

Thor: The Dark Kingdom is not the best film from the recent Marvel universe. But for those who lower their expectations a wee bit and those who enjoy being transported to strange worlds by great fantasy cinema, this is one not to be missed. And as always with Marvel movies: wait for the credits, because here come two short clips (one in and the second at the end of the credits), for which it is well worth sitting down. No real hammer - but still absolutely worth seeing!

Cinema trailer for the movie "Thor: The Dark Kingdom (USA 2013)"
Loading the player ...