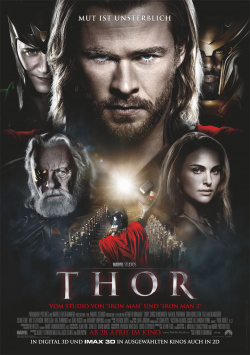 Kenneth Branagh is better known for his cinematic adaptations of Shakespeare's works and other literary classics. But after increasingly pursuing his passion in theater in recent years, he's now trying his hand at something completely new in cinema. With Thor, Branagh delivers his contribution to the ever-growing Marvel film universe, which has now been enriched by a truly divine superhero after Spider-Man or Iron Man.

In Asgard, the legendary realm of the gods, the impetuous and haughty Thor (Chris Hemsworth) prepares to succeed his father Odin (Anthony Hopkins). But when he unleashes a war with the ice giants of Jotunheim through a wayward decision, Odin strips him of his divine powers as punishment and banishes him to Earth. There he must live as a normal human until he learns to let reason prevail over arrogance. While Thor literally falls flat on his face for scientist Jane Foster (Natalie Portman) on Earth and wreaks havoc in her life, his brother Loki (Tom Hiddelston) uses the opportunity to stake his claim to the throne of Asgard. But Loki's plan could plunge not only the realm of the gods but also Earth into eternal darkness, and only Thor could stop him. But without his powers, this is an impossibility.

If you look a little closer at the first third of Thor in particular, you'll notice moments again and again that could very easily have come off as arguably trashy or unintentionally funny. But Kenneth Branagh is a real pro and so he and his team have created a fantasy world that quickly captures the viewer thanks to a great set and great special effects. Granted, Asgard and Jotunheim already look very artificial. But that's more than appropriate here, as these are fantasy worlds, the realm of gods, and not a place on Earth or a foreign planet. The scenes on Earth provide a very good and atmospheric counterpoint, and the effects are more than convincing here as well.

But Thor is not a pure effects movie. The actors also deliver more than decent performances. Especially Chris Hemsworth, who was seen in the short opening sequence of J. J. Abrams` Star Trek as the father of James T. Kirk, is a real surprise. If at the beginning it is still to be feared that only a rather talentless muscle package is to be seen here, the Australian quickly succeeds in dispelling these doubts. Especially in the more humorous scenes Hemsworth delivers a great performance. His Thor is a perfect blend of cockiness, coolness and tongue-in-cheek self-irony. By the end of the film, even the slightest doubt has been erased that here is a near-perfect superhero flying across the screen.

The rest of the cast, from Natalie Portman to Anthony Hopkins, also took obvious pleasure in their roles, all of them laying it on in such a way that there is never a sense that the film is taking itself too seriously. Thor, aside from a few slightly more dramatic sequences, doesn't set out to be anything more than a whole lot of fun, and that's evident on screen at almost every moment. If you thought the superhero genre and comic book adaptations were starting to show signs of saturation, you're thankfully proven wrong here.

Thor, like Iron Man, Hulk and the soon-to-be-released Captain America, is also part of the Avengers group that will hit theaters in 2012, directed by Joss Buffy Whedon. And so there are a few allusions to those connections in Thor, too, and - as with Iron Man - an important connecting piece that can be seen after the credits. So be sure to stay seated!

One quick word about the 3D effects. Like so many films before it, Thor has been converted to 3D after the fact. What has had catastrophic consequences for example in Clash of the Titans, leaves here a quite good impression. The 3D effect is not really necessary to fully enjoy this fantasy fun. But the pleasure is not spoiled by the subsequently added 3D effect, as often happens. So in the end it can be said with a clear conscience that Thor is great popcorn cinema of the most entertaining kind - no matter if with or without 3D glasses! Absolutely recommendable!