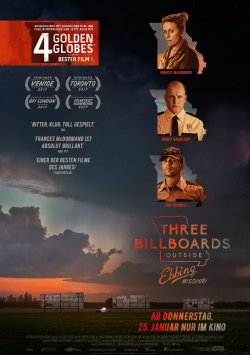 Months have passed since the daughter of Mildred Hayes (Frances McDormand) was brutally raped and murdered. Months in which the police have been seemingly inactive. The investigation has been inconclusive and there is no sign of a perpetrator. But Mildred refuses to resign herself to that. She takes unusual measures to wake up the local police: She rents three billboards at the entrance to Ebbing and has them printed with provocative slogans about police chief William Willoughby (Woody Harrelson). But when it becomes known that Willoughby is gravely ill and Hayes still won't have the signs removed, a stern wind suddenly blows against her - especially from hot-tempered cop Dixon (Sam Rockwell), a racist mama's boy with a penchant for violence. Soon the situation threatens to escalate for good.

With Three Billboards outside Ebbing, Missouri, director Martin McDonagh, to whom we also owe the wonderful Seeing Bruges. and Dying, pulls off a real feat: he tells a story that's full of cruelty, sadness, and bleakness in a way that's humorous on the one hand without diluting the gravity of the story on the other. If other filmmakers here would have punched the audience in the pit of the stomach emotionally or pushed too hard on the tear-jerker, McDonagh allows his audience some genuinely heartfelt, if bitter, laughs. This tragicomic, blackly humorous storytelling gives the story a quality without which it would not work nearly as well.

Transporting it all is an extremely good ensemble of actors. Frances McDormand is truly great as the broken mother, but it's Sam Rockwell who really leaves a lasting impression here. No wonder they both won Golden Globe awards and are also highly touted for the Oscars. Complemented by an equally excellent Woody Harrelson and very good supporting actors like Abbie Cornish or Caleb Landry Jones, the ensemble manages to carry the film not only in its great written moments, but also in somewhat weaker scenes.

Although the script really deserves all the praise and every award (so far), there are some moments here that seem a bit over the top or whose logic is not quite comprehensible. But none of these scenes seem so negative that it would affect the overall impression. And that's just very good. If you like grippingly acted dramas with bitter humour, very good dialogues and some surprising twists, you shouldn't miss this critics' and audiences' favourite. Absolutely worth seeing!