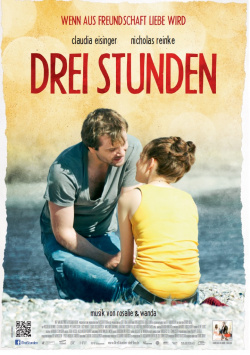 When the reserved Martin (Nicholas Reinke) meets the impulsive Isabel (Claudia Eisinger), he is quickly smitten by her. For Isabel is a woman who fights for her convictions and meets those around her with disarming honesty. She, on the other hand, has little to do with the dreamer Martin at first. It is only when she finds out that he is working on a fantastic play that the two develop first a long conversation and then a deep friendship. No matter if Isabel is in the city or once again in a remote place fighting to make the world a little better, the two are from then on one heart and soul. They talk about everything and are each other's closest confidants. But there is one thing they have never talked about before: their feelings for each other. When Isabel wants to go to Mail for three years and kisses Martin goodbye, he realizes that he absolutely has to act now. At the departure desk he reveals his feelings to a completely stunned Isabel. She leaves Martin in the departure hall, completely overwhelmed by his declaration of love, and sets about boarding the plane. But then she learns that the departure is delayed by several hours. Enough time, then, to sort things out with Martin. But to do so, Isabel must first admit to herself how she really feels about her best friend.

Three Hours is a charming romantic comedy in its own right, scoring points with likeable actors and some very nice ideas. The chemistry between Claudia Eisinger (13 Semesters) and Nicholas Reinke (Buddenbrooks) is very coherent and you take it from them that they are good friends, but between whom there is also a lot of tingling. As a viewer, you can tell from their acting and many elements of the production that the film was made with a lot of heart and soul. Especially the finale is quite magical and should give some uninhibited romantics goose bumps.

Netheless, there are also some elements that stand in the way of a consistently positive overall impression. For example, the film, just like its main characters, tries to be a bit too uptight, non-conformist and just not follow the rules of common romantic comedies. At the same time, however, there are always completely worn out clichés that are just completely unnecessary. Of course the taxi driver has to be a gruff Berliner who shows a big heart in the end. Of course the obdurate officials have to speak with a Bavarian accent, while the main characters all speak High German. And of course artists always have a bottle of wine at home while the fridge is more or less empty. Also, the way Martin and Isabel keep missing each other, sometimes just barely, is anything but original.

Boris Kunz has directed what is, at its core, a really nice film, but one that suffers from wanting to be special when it's just very ordinary. If some meanwhile only boring clichés would have been renounced and if the sometimes very amusing word fights would have been written a bit more biting, then Three Hours could have been really special - namely very special nice. But as it is, the film is just nice entertainment that doesn't really hurt, but doesn't completely sweep you away either. Therefore: only for friends of German romantic art house comedies with cutbacks worth seeing!