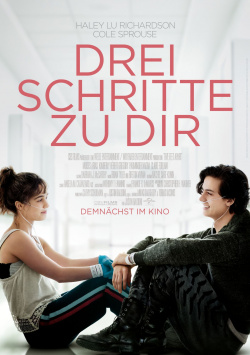 Three Steps to You

Actually, Stella (Haley Lu Richardson) is a normal teenage girl: she chats with her friends, has her own blog, and her smartphone is her most faithful companion. But there's one very dramatic difference from other girls her age. Stella suffers from an incurable hereditary disease and spends much of her life in hospital. There is a strict rule here: the girl must not come closer than 4 steps to her fellow patients. Otherwise, there is a risk that she will become infected with their bacteria, which in the worst case could be fatal. Stella has never even thought of breaking this rule - until she meets the charming but withdrawn Will (Cole Sprouse), who turns her emotional world upside down. The two slowly get closer and begin to see life with a whole new set of eyes despite all the hopelessness - if only there wasn't this rule.

Back in 2012, filmmaker and actor Justin Baldoni had worked on the acclaimed documentary series My Last Days, which portrayed people who faced their lives with a lot of positive energy and enthusiasm despite their terminal illness. Among them was Claire Wineland, now deceased, who suffered from cystic fibrosis. This encounter and the conversations with Claire had a strong impact on Baldoni and never let go. Thus was born the idea for his directorial debut, Three Steps to You, which he had writers Mikki Daughtry and Tobias Iaconis turn into a stirring original script.

The result is quite successful for a younger audience. Girls 17 and under in particular are guaranteed to be gripped by this particular love story, and will hardly be bothered by the fact that the characters suffer not only from terminal illnesses, but also from considerable stereotyping. With Haley Lu Richardson and the former child star Cole Sprouse, known from the series Riverdale, two main actors were found with whom the target group can also identify well. The fact that the story is told in a very predictable and in places very thick way doesn't bother much.

From an adult's point of view, Three Steps to You may not be a very good movie. There are just too many stereotypes, too obvious lengths and too much teen kitsch, underpinned by an 08/15 soundtrack. But the movie isn't made for an older audience, but for young adults between 14 and 17, and they get their money's worth here and are guaranteed to leave the cinema with beating hearts and tears in their eyes. Thus, the film has fulfilled its goal and can therefore, despite its weaknesses, clearly be called worth seeing.