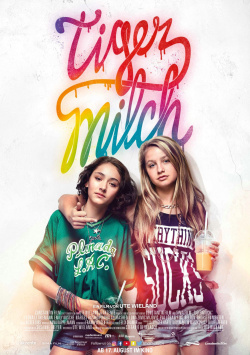 Nini (Flora Li Thiemann) and Jameelah (Emily Kusche) have been best friends for years. The 14-year-old girls are inseparable and go through thick and thin in all situations. For Jameelah in particular, a particularly exciting time is about to dawn in her young life, as a decision is soon to be made on her and her mother's (Narges Rashidi) application for naturalisation. And even though Jameelah and Nini like to rebel a bit, the girl with Iraqi roots knows that she doesn't want to take any risks in order to jeopardize the much longed-for naturalization. But then the friends witness a terrible crime. And suddenly not only Jameelah's future in Germany is at stake, but also the girls' previously unshakeable friendship.

Tiger's Milk, the film adaptation of Stefanie de Velasco's novel of the same name, is a very ambitious film. A bit too ambitious, because director Ute Wieland (Freche Mädchen) packs so many topics - banal as well as relevant - into the nearly 100 minutes of film that most of them can inevitably only be treated rather superficially. In principle, this wouldn't be a bad thing, since the film is primarily meant to portray an authentic teenage life in a Berlin apartment block. When it comes to the first time or the consumption of the titular tiger milk - a mixture of passion fruit juice, milk and brandy - then it is not tragic if this is told without real dramaturgical depth.

It's a different story when it comes to topics like deportation or honor killings. Here, any form of superficiality is simply annoying. No question, Ute Wieland is concerned to tackle such difficult topics sensitively. But the film as a whole is simply too overloaded, so that she simply lacks the time to give them the necessary depth. It doesn't help that the young actresses in particular deliver absolutely convincing performances.

What is also a bit disturbing is the strong discrepancy between the very simple youth language in which the protagonists speak to each other and the very forced way in which Nini speaks to the audience in her voice-over comments. This doesn't seem authentic, it's just too stilted. All in all, both the dialogues and the entire dramaturgy make it clear that less would have been more. Tigermilk is certainly not a bad film, the actors and the intentions behind the story prevent that. But well meant is unfortunately far from well done. And that's why the bottom line for this too powerful portion of Tigermilch is only one: With cutbacks worth seeing!