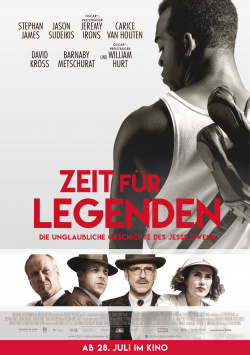 1936: Against all odds and hostility, black athlete Jesse Owens (Stephan James) has managed to qualify for the Berlin Olympics with the help of his coach Larry Snyder (Jason Sudeikis). Over two grueling years, Owens has broken record after record and become a celebrated idol for many young Americans. A gold medal would be the crowning achievement of this success story. But then Owens learns that the Nazis plan to use the games for their racist propaganda. For Owens, who already has to endure oppression in his home country because of his skin color, this is a reason to boycott the games. Then, at the last moment, he decides to compete in the games despite all the reservations - a decision with which he will make history.

Time for Legends is the first feature film to tell the story of athlete extraordinaire Jesse Owens. Since it was clear to director Stephen Hopkins and his screenwriters that it would not be possible to tell the story of the man's life in two hours, they focused on the important events of the years 1934 to 1936. After all, this period is of quite great importance for the career of Owens, but also for the sport and the fight against racism and prejudice. What happened during those two years is a truly gripping, stirring story. Unfortunately, Hopkins fails to tell it as such.

Too much does he get lost in the conventions of common sports movies and biopics to actually do justice to the grandeur of the story. Despite good actors, the characters degenerate into walking clichés, which is exacerbated by the less than polished dialogue. This is entertaining for long stretches and also has quite a high show value. But the dramaturgical depth, which would have been actually necessary with these backgrounds, is unfortunately searched for in vain. Only in the last sequence the film offers a really strong moment, which is more thought-provoking and says more about racism than the two hours before. It's a shame that the rest of the film is so caught up in clichés to make as strong a statement as that final scene.

This is not to say that Time for Legends is a bad film. There are some very stirring scenes that are very well executed visually. The acting of lead actor Stephan James and Jason Sudeikis, who specializes more in comedic roles, is also absolutely convincing for long stretches. But that's not enough to cover up the many average moments and clear weaknesses. If you don't expect more than a standard sports drama/biopic and if you can overlook the very one-dimensional character sketches and the many clichés, you'll get to see a thoroughly entertaining film about one of the most important sporting events of the past century. And in this case, there is then not gold or silver, but still bronze. Worth seeing

Cinema trailer for the movie "Time for Legends (Kanada/Frankreich/Deutschland 2016)"
Loading the player ...