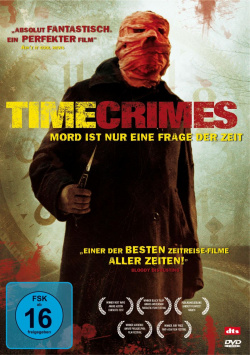 Timecrimes - Murder is only a matter of time - DVD

Film: Actually Héctor (Karra Elejalde) just wanted to rest on the terrace of his new home. But when he discovers with his binoculars a young woman who, to his delight, exposes herself only to suddenly disappear from his field of vision, Héctor sets out to see if something has happened to the young beauty. When he finds her, this seems to have happened, because the woman lies motionless on the floor. Before Héctor can take care of the stranger, he is attacked by a masked man. All he can do is escape from the brutal attacker, which leads him to the laboratory of a scientist (Nacho Vigalondo). There he hides in a strange apparatus that turns out to be a time machine that Héctor transports back about an hour into the past. From there he tries to track down the strange events - with fatal consequences...

With "Timecrimes" Nacho Vigalondo has succeeded in creating a great fantasy thriller that can captivate for over 90 minutes with the simplest of means. The first moments still come along a bit worn and some more impatient viewers might be inclined to switch off prematurely. But this is not to be recommended, because Vigalondo's film quickly turns out to be an extremely clever and exciting thriller, which inspires with many surprising twists and a fascinating main character.

When it comes to the topic of time travel, stories usually only withstand logical scrutiny for a very short time. This may also apply to "Timecrimes". There are many elements of the story that could be considered illogical or not really comprehensible. But here it should simply be refrained from questioning too much too much. This is because the fun and entertainment factor of the movie is unnecessarily diminished. Those who simply get involved in the story and don't insist on logic at every moment will be rewarded with high tension and many clever ideas.

In the meantime intensive work is being done on a US remake of the 2007 time travel thriller. It is doubtful whether this will then function equally well. Because it's not only the story and the good actors - first of all of course Karra Elejalde with a very intense performance - but also Vigalondo's almost minimalistic staging that makes this film so effective and atmospheric. The director, who also plays a central role in front of the camera as a mysterious scientist, has created an extremely effective mystery thriller with the simplest of means. Even without big special effects and rough shock effects, it gives you goose bumps and really good entertainment. Absolutely worth seeing!

Picture + Sound: The low budget of the film is definitely noticeable in the picture quality. Here and there, minor soiling can be spotted, image sharpness and contrasts could also be better in places. Only the colouring can be completely convincing. The sound is relatively unspectacular, but the uncanny atmosphere of the story is coherently captured and the dialogues are well mixed. Despite the visible weaknesses, there are still some who are in favour of this: Good.

Extras: The single DVD only has the trailer for the movie to offer. On the double DVD, which is also available, there are even more extras, such as the film in chronological order, a making of and a short film.

Fazit: "Timecrimes" is an original and extremely exciting time travel thriller, which knows how to captivate until the surprising end. However, the logic of the story must not be questioned too much. But what Nacho Vigalondo has achieved with little means is something to be proud of in every respect. The technical implementation leaves something to be desired and extras are only available on the Special Edition. Nevertheless - no matter in which version: absolutely recommendable!