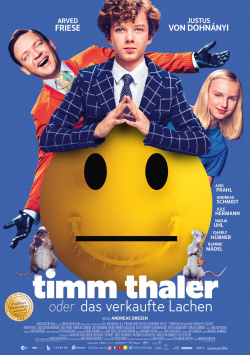 Timm Thaler or The Sold Laughter

Although he grows up in poor circumstances, young Timm Thaler (Arved Friese) has something particularly valuable: his laugh! Even after the tragic death of his father (Bjarne Mädel), Timm has not lost it. The demonic Baron Lefuet (Justus von Dohn&aacute;nyi) knows how much such a laugh is worth - and he desperately wants to possess it to become even more powerful and rich. So he offers Timm a deal: If the boy sells him his laugh, he will win every bet from now on. Timm hesitantly agrees to this offer, as he now seems to be able to fulfil his every wish. But the price he has to pay is higher than expected. From now on, Timm is no longer himself. But the Baron is so powerful and cunning that it seems impossible that Timm will ever get his laughter back.

Most people associate Timm Thaler oder das verkaufte Lachen less with the book by James Krüss, but rather with the free TV adaptation, which was a real street sweeper in the late 70s and made Thomas Ohrner famous as Timm Thaler. Andreas Dresen did give the TV Timm Thaler a cameo appearance in his theatrical version, but otherwise he's tried to stay as far away from the popular TV multi-parter as possible. Although some things suggest that the film is set in the 1920s - as the novel is - Dresen wanted to give his production a more timeless feel.

There are some aspects that are quite successful. These undoubtedly include the great set and also the young actors. Others, however, are thoroughly off the mark. There are, for example, Behemoth (Axel Prahl) and Belial (Andreas Schmidt), the Baron's henchmen, who are sometimes seen as rats and sometimes in human form. It is already questionable why the lady Belial is played by a man. But why she has to talk in a stupid fantasy language is really beyond logic. Is it supposed to be funny? But it isn't. Another shortcoming is the playing of Justus von Dohn&aacute;nyi. He plays so over-the-top demonic that it almost seems silly, but really not threatening. Horst Frank was so impressive in the TV series because he really seemed like a devil in his understated way.

Many children's movies, especially from Germany, show adult characters in particular as overdrawn caricatures far too often. Unfortunately, that's the case again here. Because the humour often seems very flat, there is never any real tension. Dresen really is a good and very talented director. From a purely technical point of view, this becomes clear in many places. Nevertheless, Timm Thaler oder das verkaufte Lachen is simply not a very good film. Many good ideas and the love for the book template are unfortunately not enough, when on the other hand some things just don't want to work and in the end a not really harmonious overall picture emerges. Dresen should have trusted his young viewers to accept a serious, exciting story without oh-so-funny supporting characters and exaggerated figures. Timm's struggle to find his laughter should be exciting and involving, not a colorful, flashy comedy. Dresen's film is neither, but a strange hermaphrodite that unfortunately still only very conditionally deserves a viewing rating for children between the ages of 6 and 10.

Cinema trailer for the movie "Timm Thaler or The Sold Laughter (Deutschland 2017)"
Loading the player ...