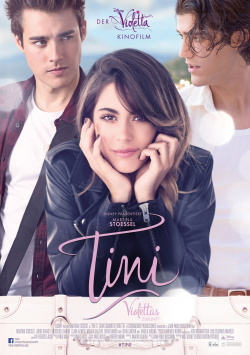 Violetta (Martina Tini Stoessel) has made it! Her world tour was sold out and her songs make it to the top of the charts. So of course the call for a new album is loud. But Violetta can't take it anymore. The constant hype around her person is simply too much for the girl. That her relationship with Le&oacute;n (Jorge Blanco) is also in a deep crisis, makes things only worse. And so Violetta decides to retire from the limelight altogether. In Italy, with an old friend of her father, she wants to recharge her batteries and rediscover her love of music. Far away from her life as Violetta, she slowly finds herself and realizes that her future actually lies in her past - and then the way is clear for her new life, her life as Tini!

Tini - Violetta's Future is the big screen finale of the enormously popular Disney series Violetta, which made its leading actress Martina Stoessel an international superstar. The series regularly brought the Disney Channel dream ratings, the soundtrack CDs stormed the charts worldwide and the big live tour was also sold out almost everywhere. But every story, no matter how beautiful and successful, has an end. And so Martina Stoessel is now saying goodbye to the character of Violetta in order to successfully make music as Tini in the future. But of course it was not possible to end the series just like that. After all, the makers wanted to thank the fans of the series with a very special farewell gift for their loyalty. And so they staged the end of the series in the form of a major motion picture.

This may not be high quality art cinema, but it is undoubtedly a great gift to all fans. The beloved characters from the show get one last appearance here, and a few new characters show that an ending - as sad as it may be - can always mean a new beginning. The tumultuous relationship between Violetta and Le&oacute;n is given another good shake-up before being brought to a satisfying conclusion. And, of course, there are a couple of new songs to listen to that are instantly catchy.

No new fans will certainly be won over with the feature film. For it the whole thing simply works too much, like a filmed BRAVO photo love story. Countless clichés are used and the story takes itself far too seriously. But those who love Violetta won't mind that. After all, this is about the fans, who are to be offered once again everything that made the series so popular - only a little bigger, more rousing and, towards the end, more emotional. And so Tini - Violetta's Future is altogether a worthy, bittersweet farewell that not only makes Violetta fans sad, but also makes them long for all that will be seen and heard from Tini in the future. Worth seeing!