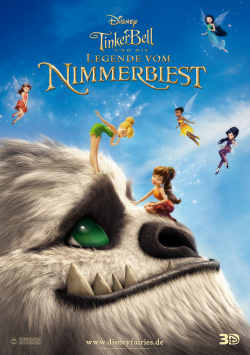 Tinkerbell and the Legend of the Never Beast

Whenever the Valley of the Fairies is threatened by danger, the Guardian Fairies, led by Nyx, stand ready to protect the valley and its inhabitants. A good thing, actually. But sometimes the kind-hearted animal fairy Emily wishes Nyx and the other Guardian Fairies weren't quite so vigilant. Because she's discovered a large, mysterious animal she's christened Grumble, and she's determined to get to know him better before he's driven out of the valley. At this point, Emily has no idea that Grumble is the legendary Neverbeast, who has awoken from a long sleep, seemingly only to build strange towers out of stones. To help the creature do this, and protect it from the Guardian Fairies, Emily needs the help of Tinkerbell and her friends. But they are not at all taken with the idea, because according to legend, the Never Beast is actually supposed to be a threat to the valley...

Tinkerbell and the Legend of the Never Beast, like the other two Tinkerbell films before it, is actually directed for the US home movie market. In Europe, however, the films have also successfully made it to theaters. And like its two predecessors, the new adventure does quite well on the big screen. Of course, the animations can't quite keep up with those of much more expensive and elaborately staged cinema productions. But for the very young target audience, this shouldn't be a negative factor. In addition, the 3D effects are pretty to look at in some moments, though they are not too intrusive. So the very young viewers won't be visually overwhelmed. The story is exciting, but not too scary and offers as a balance to the somewhat dark scenes still plenty of humor of the harmless nice kind.

Despite the title is also in the new adventure not Tinkerbell, but one of her friends from the realm of Disney Fairies in the center of the story. While it was the fairy shine fairy Zaira in the last film, this time it's the animal fairy Emily. Tinkerbell herself plays a rather subordinate role, but this is not a problem for the beautiful, very mystical story. The unusual friendship that develops between Emily and Grumble offers many nice and funny moments. Towards the end, however, it also gets a bit dark and sad, which young children should be prepared for.

Overall, Steve Loter has created a very nice animated film that combines lovable characters, the colorful fairy world and an exciting story that is good in its simplicity into an entertaining adventure that, at just under 76 minutes, also offers a running time that is appropriate for the target audience. Anyone who liked the first cinema appearances of the Disney Fairies is guaranteed to love TinkerBell and the Legend of the Never Beast. Therefore: For fairy fans between 5 and 10 years and all young-at-heart accompanying persons absolutely worth seeing!

Cinema trailer for the movie "Tinkerbell and the Legend of the Never Beast (USA 2014)"
Loading the player ...