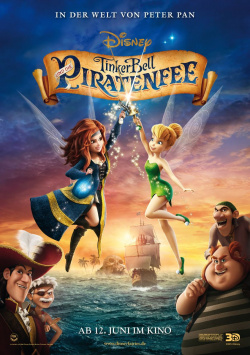 TinkerBell and the Pirate Fairy

TinkerBell and her fairy friends are finally coming back to the movies. Made famous by the classic Peter Pan, TinkerBell has been at the center of her very own franchise for several years now: the Disney Fairies. After four successful releases for the home movie market and the successful first movie The Secret of the Fairy Wings, TinkerBell and her friends now get to go on another adventure on the big screen that also provides answers to some mysteries from Peter Pan.

The focus of TinkerBell and the Pirate Fairy is the curious fairy shiner Zarina (voiced by Yvonne Catterfeld), who loves to experiment with fairy shine even though she's actually been forbidden to do so. When one of her experiments goes disastrously wrong, Zarina flees the Valley of the Fairies. Some time later, she reappears, puts all the fairies into a deep sleep, and sifts the blue fairy glow. TinkerBell (Gabrielle Pietermann) and her best friends Rosetta, Silberhauch, Vidia, Emily and Klara pursue Zarina and find out that she has joined the pirates of Skull Rock and is even hailed as their captain by the villains. But TinkerBell doesn't want to believe that Zarina is really evil. And so now the fairies must not only get the fairy shine back, but also get their friend back. But that's when they are opposed by the young pirate James, who will become a very special threat to TinkerBell many years later.

Like The Secret of the Fairy Wings, TinkerBell and the Pirate Fairy is actually designed for the home movie market. While the film went straight to DVD and Blu-ray in the U.S., TinkerBell fans in other countries get to enjoy the new adventure on the big screen. And there, the kid-friendly adventure works really well. The 3D effects are pretty to look at, but at the same time aren't too intrusive to overwhelm the very young viewers. The story is exciting, but not too scary, and still offers plenty of humor of the harmless nice kind to balance it out.

The idea of telling the origins of Captain Hook alongside an exciting Fairies adventure makes the film absolutely worth watching even for adult companions who know and love Peter Pan, especially since there are some other nice references to the Disney classic in addition to the Hook story. Director Peggy Holmes has once again created a very nice animated film that combines lovable characters, the colorful fairy world and a story that is good in its simplicity into an entertaining adventure that also offers a runtime appropriate for the target audience at just under 78 minutes. Those who already liked The Secret of Fairy Wings are guaranteed to love TinkerBell and the Pirate Fairy. Therefore: For fairy fans between 5 and 10 years and all young-at-heart accompanying persons absolutely worth seeing!

Cinema trailer for the movie "TinkerBell and the Pirate Fairy (USA 2013)"
Loading the player ...