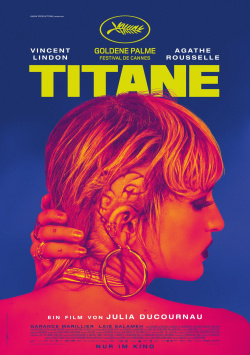 Years ago, the son of firefighter Vincent (Vincent Lindon) disappeared. Suddenly, a young man (Agathe Rousselle) claims to be the missing Adrien. Vincent has no doubt about it, even though his supposed son is acting strangely. He blames this on dreaming what the boy must have experienced. He doesn't see a connection with a series of murders in which the model Alexia is wanted - yet...

It's not at all easy to summarize the content of "Titane", the new film by Julia Ducournau. Because this work is... how should I put it... very, very special. Is there really a story in the classical sense? I don't think so. Is there a lot of confusing, disturbing stuff shown here without even a hint of explanation? Quite clearly: yes! Could you read something into every image: Probably yes, but I didn't succeed. I admit that the whole thing exerted a very special fascination on me that I couldn't escape. But for the life of me I could not discover a meaning.

I had a conversation with a colleague after the screening of the film, who thought it was quite great. Why, he couldn't say. "Simply because it is different", were his words. And I agree with him: this film is different. I have seen many things before and during my work as a film critic and I can almost never say that I have not seen something before. With "Titane", on the other hand, I can justifiably say: I haven't seen anything like it in any other film. I remain deliberately vague because I don't want to diminish this "What the F..." experience for those of you who still want to give the Cannes Palme d'Or winner a shot.

Visually, the film is intense, no question. Well acted, too. But is it really a good film just because it's different? Does it deserve the Palme d'Or just because it goes against the grain? Or is there a deeper meaning hidden beneath the utter absurdity of what is being told here that just eludes me? Maybe. Now, I really don't want to presume to judge whether "Titane" is the masterpiece that the film is being hailed as. I can only say that it left me disturbed and extremely confused, which is why I really only want to give it a "worth seeing" with extreme reservations. But clearly, if you want to experience intense cinema and see something completely different from what contemporary entertainment cinema has to offer, you can't miss this one.

Cinema trailer for the movie "Titane (Frankreich 2021)"
Loading the player ...