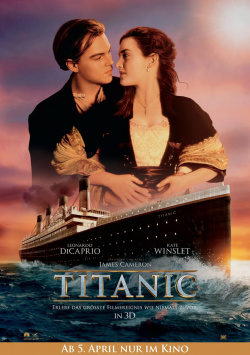 It is one of the most successful films in cinema history. It has won 11 Oscars and over 80 other awards. Soundtrack CDs, videocassettes, and DVDs of the film have sold millions of copies. And yet, it's now totally uncool to like Titanic. Rather, in the face of the oh-so-cheesy love story, especially as a man, you have to roll your eyes in annoyance or utter the completely original line: Why should I watch it, I know how it ends! And in this sense I can proudly announce that I am completely uncool through and through and with full conviction. Because I love this movie and I was very happy when it was announced that James Cameron will let the Titanic sink in the cinema once again. The fact that the whole thing is now to take place in 3D, I did not care at first moment, because the joy of finally being able to see the film again on the big screen was first in the foreground.

While there was never any fear that here would be a similarly disappointing conversion, as George Lucas had presented with his Episode I in barely perceptible 3D. After all, James Cameron kicked off the 3D wave with his Avatar and thus has a reputation to lose. Still, I was initially skeptical that Titanic would work in 3D. The answer is quite clearly yes! However, the technology is not used as a gimmick to make overly obvious 3D effects jump out at the viewer. Rather, it creates a depth of image that brings out the many details of the magnificent equipment and spectacular sets even better than in the conventional version. But also the underwater sequence at the beginning of the film or the wonderful finale shine in a whole new splendor.

What concerns the spectacular doom sequence, it must be noted that Cameron has just here largely dispensed with the use of quite possible 3D effects. True, there are some very effective moments and the aforementioned image depth also comes into its own well here. But it's not like parts of the ship fly into the audience or passengers fall from the Titanic directly into the cinema. It is to his credit that Cameron refrained from doing this. After all, this is a real tragedy that claimed many lives exactly 100 years ago. The fact that no 3D spectacle was made out of it, that the spectators in joyful enthusiasm put, is a very good decision.

Besides the 3D optics Cameron has hardly changed anything in his film. Some effects have been slightly spruced up, but otherwise the film presents itself exactly as it did 15 years ago to thrill millions. And especially in the cinema, the whole thing still works extremely well. There are no notable lengths, hardly any weaknesses in the acting performances, and the work of the set builders and sound designers is simply mesmerizing even after multiple viewings. As I said, it may be cool to bitch about Titanic, call Leonardo DiCaprio a milquetoast, and dismiss the love between Jack and Rose as kitsch. But that doesn't change the fact that Titanic is craftsmanlike beyond reproach and has made millions of viewers happy and moved them to tears for a reason. And the fact that James Cameron's team has spent several months of painstaking work to give the film the 3D conversion that it deserves, can really be seen in the final result.

So if you have never seen Titanic in the cinema or are happy to finally see it again on the big screen, you can confidently put on the 3D glasses for three hours and dive into a piece of great cinema magic. And that's why, just like 15 years ago, no matter whether it's in 2D or 3D, this movie is a really great piece of cinema that should definitely be seen in one!