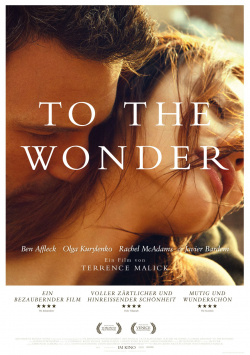 It used to take director Terrence Malick (The Narrow Ridge, In the Embers of the South) a good 20 years to make a new film. But since his esoteric Tree of Life, the publicity-shy filmmaker seems to have caught the fever. Just one year later, he is already presenting his latest work, To the Wonder, and three more films are already in post-production. But whether this reignited creativity is really something to be excited about may be sincerely doubted, given the quality of To the Wonder.

A story in the classic sense is not told here. Rather, a loose narrative painstakingly holds together the images beautifully captured by cinematographer Emmanuel Lubezki. It is about Marina (Olga Kurylenko), a young French woman who falls in love with American Neil (Ben Affleck) and follows him to the US with her daughter. But she is not happy here and soon the once so passionate love breaks up. Marina returns to Paris with her daughter, while Neil begins an affair with his childhood friend Jane (Rachel McAdams). But even this liaison doesn't last long, as both Neil and Marina realize they can't forget each other. And so Marina returns to Oklahoma, hoping that this time their love will be strong enough for a happy future.

No question, the imagery of To the Wonder, as with Malick's previous films, is quite magnificent. Beautiful to look at, the drama certainly is. But a pile of crap just doesn't get any better by tying a fancy bow around it. And unfortunately, that's all this film is. I've held many of Malick's earlier works in high regard, and still consider The Narrow Ridge to be an absolute masterpiece. And even though I personally couldn't relate to Tree of Life, in some ways I could still understand why that film really intrigued, touched, and delighted some viewers. With To the Wonder, on the other hand, it's really impossible to understand. Emotion doesn't come across at all and Malick's style here just comes across as cold and soporific.

Surely, it doesn't always take expansive dialogue, pacing or a clear plot structure to make for a good film in the end. There are plenty of works that defy the usual viewing standards, but are still extremely strong, entertaining and superbly directed. But when the actors are reduced to staring emotionlessly into space (Affleck, Bardem) or dancing around (Kurylenko, McAdams), when a filmmaker simply doesn't evolve his style and offers the same thing over and over again (e.g. whispered voice-over comments), then you simply can't speak of good directing. This makes it all the more annoying that there are actually colleagues who, despite not actually liking the film, only give To the Wonder a positive review because of Terrence Malick's particular reputation. Malick simply does not deserve such an appreciation, despite excellent works in the past with this film.

May be that there are a few viewers who are touched not only by the beautiful images, but also by the way in which here is told about the transience of love, and leave the cinema completely enthusiastic. But such positive reactions will surely be the exception. To the Wonder is simply a beautiful package without content, an overlong screensaver for intellectuals and a dark stain in the <x>Ampersand</x>OElig;uvre of the reclusive director. That really only leaves us with the hope that Malick can make this sleeper hit forgettable with his next works. Where are the Men in Black with their lightning thingy, when you really need them