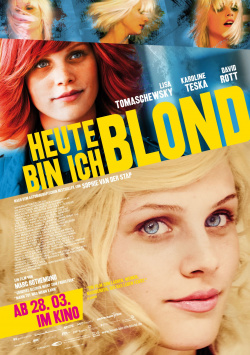 When Sophie van der Stap received the shocking diagnosis in 2005, at just 21 years old, that she had a rare and very aggressive form of cancer, it was the beginning of a time marked by agony and fear of death for the fun-loving woman. But it was also a new beginning that presented Sophie with a whole new side to life. Instead of surrendering completely to her illness, the young woman decided to write about her everyday life in hospital, initially in a blog, which would later become a book after she had successfully beaten cancer, which went on to become a huge success worldwide. Based on this bestseller, director Marc Rothemund has now made a tragicomedy that doesn't really do justice to the moving story of Sophie van der Stap, but which can convince over long stretches thanks to a good leading actress and some very successful moments.

In Heute bin ich blond Lisa Tomaschewsky plays the prospective student Sophie, who is looking forward to finally moving into a shared flat with her best friend Annabel (Karoline Teska), enjoying big city life, learning new things, partying and maybe finding love. But these dreams are abruptly shattered when Sophie suddenly falls ill and receives a terrible diagnosis. Cancer! Instead of a new life, the 21-year-old suddenly finds herself facing death. Her new home becomes a barren hospital room, the aggressive treatment her agonizing daily routine. But there's still so much Sophie wants to experience, and she's damn well not going to let an illness stop her. Decked out in a whole series of wigs, Sophie manages to escape her hospital routine for brief moments at a time and forget about her illness. Wild party nights make the girl really blossom, but at the same time damage her health. Nevertheless, Sophie does not want to be forbidden to live and so she faces her illness with all her strength and with a lot of courage.

After the very light romantic comedy Mann tut was Mann kann, Marc Rothemund approaches the story with considerably more seriousness in Heute bin ich blond. However, he avoids turning the drama into a purely concerned film through the targeted use of light-hearted comedy. Instead, he allows his audience to not only suffer along with Sophie, but also to laugh with her and feel a bit of romance as well. This mixture ensures that the film offers good entertainment despite its subject matter and is not crushed by its dramaturgical heaviness.

With the actors, first and foremost Lisa Tomaschewsky, Rothemund has shown a very good hand. The newcomer's acting comes across as pleasantly natural and unspent, lending the story a certain authenticity that successfully holds its own against the numerous clichés employed. Unfortunately, not all aspects of the film are equally convincing. This is especially true for some parts of the script, which seem extremely soap-like in direct comparison to the very successful moments and lack the depth that can be felt in other scenes. Furthermore, the story drags too much towards the end to really captivate the viewer anymore. While the final scene makes sense in its function as a parenthesis, it still feels somehow superfluous and takes away much of the power of the previous scene, which would have worked much better as an ending.

So overall, unfortunately, Today I'm Blonde didn't become the strong film it could have been based on its underlying story. However, the good actors, the engaging mix of humor and drama, and some thoroughly moving moments make it all worth watching in the end for fans of German dramas of the more light-hearted kind: well worth watching!