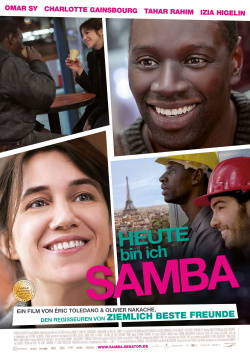 Today I am Samba

For ten years now, the Senegalese Samba (Omar Sy) has been living in Paris. Not quite legally, but inconspicuously and well integrated. He keeps his head above water with odd jobs, trying to avoid any form of trouble. But when his diligence and reliability finally seem to pay off and he is offered a permanent job, his dream of a legal life in France threatens to be shattered for good. The authorities refuse to issue him the necessary papers and immediately send Samba to custody pending deportation. The inexperienced social worker Alice (Charlotte Gainsbourg) is now supposed to help him to stay in Paris. Too bad this is the first case of the extremely thin-skinned woman, who has no idea how the wheels of bureaucracy grind. And although her dedicated colleagues give her lots of good advice, Alice is so fascinated by the charismatic Samba that she makes a glaring mistake in the very first conversation and gives him her phone number. But although he is very taken with the fact that Alice doesn't seem to be one of the usual undercooled case workers, the chances that his deportation application will be stopped after all are now close to zero.

With Today I Am Samba, the directing duo Eric Toledano and Olivier Nakache finally present the long-awaited follow-up to their surprise success Pretty Best Friends. Naturally, the expectations for the new film are extremely high. And although they have their wonderful lead actor Omar Sy on board again, they unfortunately don't manage to live up to these admittedly inflated expectations. The biggest problem the film has to contend with is the fact that Toledano and Nakache couldn't seem to decide what story they wanted to tell here. Should the film be a romance between a psychologically burnt out temp social worker and a charming dreamer? Or the story of friendship between two migrants in Paris? Or rather a drama about the everyday struggle of many migrants in Europe against deportation?

In principle, it wouldn't be a problem if the film consisted of these different set pieces, and if the different parts of the story mixed comedic as well as dramatic and romantic aspects. But since none of the elements really works well on its own, the overall picture leaves a rather disappointing impression. The production gets too lost in worn out clichés and half-baked story lines, that the viewer isn't really carried away by the story. Sure, there are some quite wonderful moments, especially between Samba and his friend Wilson (Tahar Rahim). Scenes like the one where Samba tries his hand at cleaning windows alongside Wilson definitely have the entertaining quality of Pretty Best Friends. But unfortunately, such moments are in short supply. In large parts, rippling trivialities rule the proceedings. That's a pity, because in many cases it's obvious that there are some very nice ideas that just can't be allowed to unfold.

When Omar Sy is allowed to deliver a great dance number to some snappy soul music, it becomes clear how torn the filmmakers are between the temptation to repeat the recipe for success of Ziemlich beste Freunde and to try something completely new, and in the end they chose a middle ground that just doesn't work. That doesn't make Today I'm Samba a bad movie by any means. There are too many successful moments for that - as small as they may be. It's just a pity that this very beautiful and especially in this time also important film, which hides somewhere in the overloaded and indecisive jumble, hardly gets the chance to unfold its full potential. And that's why there is only a somewhat disappointed: With cutbacks just worth seeing!

Cinema trailer for the movie "Today I am Samba (Frankreich 2014)"
Loading the player ...