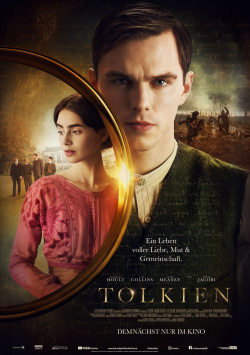 John Ronald Reuel Tolkien (Nicholas Hoult) has always had a soft spot for stories. But at an early age, he must learn that real life writes the cruelest stories. After losing his mother, he arrives at a school where he feels more than a stranger - until he makes friends with some schoolmates. This community also gets him through hard times, but with the outbreak of the First World War it threatens to break. Tolkien must now learn to come to terms with the trauma of the war and the losses. His great love Edith (Lily Collins) could help him with this - but so could writing. And indeed, all that he experienced in his childhood and youth will be incorporated into a cycle of novels that will shape the world of fantasy literature like few other works of the 20th century.

Tolkien faces some difficulties. For one thing, the film lacks any support from the heirs of J.R.R. Tolkien, and for another, it tries a little too frantically to appeal to the many Lord of the Rings fans by constantly working allusions to the classic into the story, both dramaturgically and visually. While this often looks really good, it seems a little too forced overall to be truly believable. Otherwise, Dome Karukoski has directed a fairly standard biopic that almost meticulously follows all the usual criteria of the genre.

This is far from bad. After all, the story of the future writer's difficult childhood and adolescence is visually engagingly directed and really well acted, especially by Nicholas Hoult. But the film as a whole simply walks too familiar a path and doesn't take any risks. This leads to the fact that the production ripples along quite shallowly. It's nice to look at, but - in contrast to Tolkien's works - it can't leave any lasting impression.

That's not to say that Tolkien didn't have some really strong moments. But they are almost entirely lost in the otherwise too sedate and conventional production. What remains is a well-acted, fairly entertaining work that tries too hard to be bigger than it actually is. All in all, that's only good enough for one: Worth seeing with cutbacks!