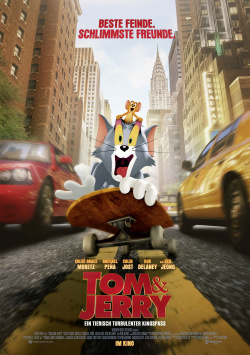 The most famous cat and mouse team is back! This time Tom the cat and Jerry the mouse meet in New York and cause a lot of chaos. The two of them also end up in a luxury hotel, where the preparations for the most splendid celebrity wedding of the year are in full swing. In the middle of it all is Kayla (Chloë Grace Moretz), who has managed to get herself a job as a wedding planner and is completely overwhelmed. Not only is hotel employee Terence (Michael Peña) constantly breathing down her neck, but now she has to deal with the trail of devastation Tom and Jerry leave behind at the hotel. But that's where the problems really begin for Kayla...

Tom & Jerry"have been up to their mischief since 1940. The animated films, which are mostly about Tom the house cat trying to catch Jerry the mouse, have won several awards - including seven Oscars - and still enjoy cult status among a large fan base. Numerous series, short and feature films have been made over the last 80 years. And now director tim Story presents the latest coup with his mix of real and animated film. The result, however, is somewhat disappointing.

This is mainly because too much time is wasted on the frame story about Kayla and the ostentatious wedding in the hotel. This is rather boring for children and not particularly entertaining for adults either, as the ensemble here doesn't exactly shine with subtle acting. Especially Chloë Grace Moretz plays way too over the top, which is just annoying in the long run. But even when Tom and Jerry are the focus, the film rarely gets its act together. Tim Story just doesn't manage to hit the right tempo when it comes to the much-loved duels. Everything seems kind of ponderous and ponderous. And the soundtrack Story puts under the cat-and-mouse game doesn't want to fit at all.

But there are also some scenes that are really funny. Kids in particular will definitely be able to have fun here. Especially since the real New York makes a really good backdrop, providing some spectacular backgrounds for the amusing arguments between the legendary cartoon characters. With a little better timing and a little less subplot, the whole thing could have been a really good family film. As it is, the whole thing is quite nice, especially for younger kids - but nothing more. For it there is then under the line also only one: with deductions worth seeing!