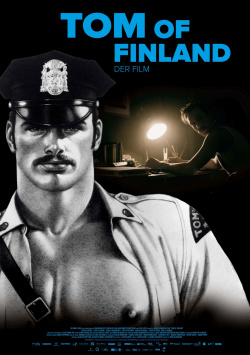 Touko Laaksonen (Pekka Strang) has a problem: he's gay. And in Finland shortly after World War II, that's not only a sin, it's illegal. And since he doesn't want to go to jail, he has to hide his homosexuality - even from his sister Kaija (Jessica Grabowski), from whom he never really kept secrets otherwise. To put himself out there, Touko begins to draw pictures of gay men proudly and freely living out their sexuality. When he falls in love with his colleague Veli (Lauri Tilkanen), the two men begin a relationship in secret. From his partner, Touko is inspired to publish his work. Not in Finland, of course, but abroad. Under the pseudonym Tom of Finland, his pictures reach Los Angeles via Berlin, where they soon begin an unexpected triumphal procession. And suddenly Touko becomes a symbolic figure for an entire generation of gay men.

Tom of Finland tells the true story of the Finnish artist Touko Lakksonen, whose drawings made him one of the most influential figures in 20th century gay culture. Filmmaker Dome Karukoski does a very good job of building an oppressive atmosphere that makes it understandable how much homosexuals in post-World War II Finland had to live in constant fear of persecution, and how liberating it must have been for Touko to experience a comparatively liberal treatment of his gayness on his first visit to the U.S.

The actors are convincing throughout, and the design of the film is absolutely spot-on as well. Still, especially with the time jumps, it would have been helpful to know in which year the events shown take place. One can guess with a little knowledge of politics and contemporary history, but Karukoski's decision to forego exact time references definitely causes confusion at some moments.

But that's only a minor flaw in an otherwise very accomplished biopic that is more than just the story of an important man. It's also a blazing plea for personal freedom and an ode to great love. All of that in one film - it more than deserves a viewing!

Cinema trailer for the movie "Tom of Finland (Finnland 2017)"
Loading the player ...