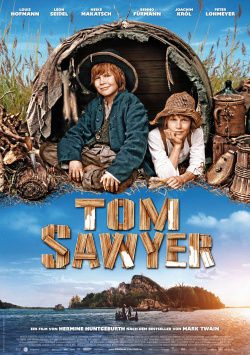 Mark Twain's books about the adventures of the boys Tom Sawyer and Huckleberry Finn are among the great classics of youth literature and have been filmed several times since 1917. In Germany, the German-Canadian TV series from 1979 in particular enjoys enormous popularity. Now director Hermine Huntgeburth (Neue Vahr Süd, Die weisse Massai) and producer Boris Schönfelder (Antikörper) have once again taken on the classic material to bring the adventures of Tom and Huck to a whole new generation in a timeless way. The first part, Tom Sawyer, already shows that this plan has absolutely succeeded.

Tom Sawyer (Louis Hofmann) has only fluff in his head. And he usually puts them into action with his best friend Huckelberry Finn (Leon Seidel). This often gets him into trouble, especially with his aunt Polly (Heike Makatsch), with whom Tom lives together with his half-brother Sid (Andreas Warmbrunn). But as much as Aunt Polly tries to raise Tom to be a decent boy, he and Huck would rather dream of making a career as pirates. But when, on a night outing, the boys witness crook Indian Joe committing a murder that he blames on unsuspecting Muff Potter (Joachim Król), they stumble into a real adventure that takes on more dangerous proportions than the boys would like.

The most positive aspect of Tom Sawyer is probably that, aside from the theme song, the film doesn't make a cramped effort to come across as modern and cool and thus pander to young viewers. Rather, Hermine Huntgeburth tries to make the film seem timeless, which also applies to the humor and the more adventurous elements of the story. Admittedly, some elements of the production are nevertheless coloured by the current zeitgeist. Heike Makatsch as Aunt Polly, for example, is much nicer and less intimidating than Brigitte Horney in the 79 series. But all in all the story doesn't seem cramped modernized and can unfold its full narrative power.

Children will have a lot of fun with the jokes of Tom and Huck. But there is no shortage of suspense either. That's primarily to the credit of Benno Führman, who makes a superbly fearsome Indian Joe. It's nice that this villain hasn't degenerated into a joke character just for kids to laugh at when he falls on his butt. No, this Indian Joe is evil, stone cold, and a real threat. So the fact that Tom gets nightmares from this man (a scene that should give even adult viewers the creeps) is more than understandable.

An aspect that also works well is the coherent mix of elaborate sets and landscapes altered by computer effects. For example, a location along the Havel River became, quite convincingly, the Mississippi River town where Tom Sawyer is set. Scenes in Romania and indoor shooting in Cologne complete the whole to a coherent picture, which easily takes the viewer into the world of Tom and Huck.

And last but not least, of course, the two child actors must not go unmentioned. Louis Hofmann and Leon Seidel give convincing performances and were clearly having fun. True, Leon Seidel seems a little too clean and well-fed for a boy living on the streets, but the creators can be forgiven for this artistic license.

As someone who grew up with the 1979 series, I have to say that this new version of the Mark Twain classic seems to lack a little of the charm of past productions. However, through a child's eyes, things admittedly look different. For young viewers, this remake offers fun, excitement and just really good entertainment. A great adventure film for young and young at heart, which already makes you want to see Huck Finn, which is scheduled for release in 2012. Worth seeing