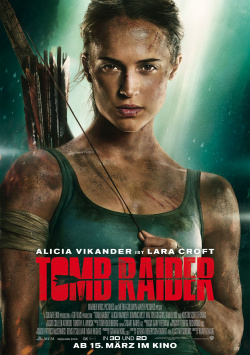 Seven years have passed since Lara Croft's (Alicia Vikander) father disappeared without a trace. He has long since been declared dead, and Lara would be entitled to a million-dollar inheritance if she would only accept that her father is indeed no longer alive. But the young woman doesn't believe it. She would rather live a modest life as a bicycle courier than give up her father. One day, when she comes across a secret room on the abandoned family estate, she finds clues in it to her father's last whereabouts: an uninhabited island off the coast of Japan. The adventurer was convinced that there was a legendary tomb here, whose existence must be kept secret from evil forces at all costs. But instead of complying with her father's last wish and destroying all his records, Lara sets out to find the island herself, and in doing so stumbles into an adventure that could end up being life-threatening, and not just for her.

There's no question that, visually, Angelina Jolie was almost an ideal fit for the beloved computer game icon Lara Croft. But her two Tomb Raider films just couldn't really convince. The scripts were weak and the productions nowhere near as spectacular as the game templates promised. Now the Norwegian director Roar Uthaug (Cold Prey, The Wave) dares to reinterpret it. And he does it really well with Swedish Oscar winner Alicia Vikander in the lead role.

Sure, this version of Tomb Raider is no great revelation either. But it has become a very entertaining adventure film, in which Lara Croft is allowed to reveal significantly more and more interesting facets of her character than Angelina Jolie was granted. Even if the character doesn't really have any depth, she is at least given some rough edges that make her very interesting, especially at the beginning. The sympathetic play of Alicia Vikander underlines this very convincingly.

With some humor, very good action sequences and a great set design, especially the first half of the film can convince all along the line. Yes, there are very clichéd dialogues and yes, also many aspects of the already quite thin story are also arguably predictable. But the execution is so well done, both in terms of craft and acting, that most of the weaknesses become meaningless as a result. The film is simply fun, offers plenty of showmanship (Lara's balancing act on an old airplane over a waterfall may not be logical, but it's really great) and enough pace to keep you entertained for almost two hours.

So if you're not looking for much more than entertaining popcorn cinema with a great heroine, you'll get your money's worth here. And in the end credits there is a nice little allusion for the fans of the video game Lara Croft, which makes you want to see Alicia Vikander in more Tomb Raider movies. Let's just hope that this first appearance is successful enough to spawn a few more sequels. Absolutely worth seeing