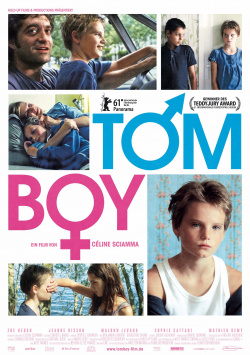 Ten-year-old Laure (Zoé Héran) is not interested in dolls or pretty dresses like most of her peers. Laure prefers to wear pants, have her hair cut short, and would rather be a boy anyway. When she moves with her family to a new neighbourhood, the girl sees her chance for a completely new beginning. In front of her new friends she pretends to be Michael and always comes up with new tricks to keep up this facade. That this game will be exposed on the first day at the new school at the latest, Laure closes her eyes to. She is too happy as Michael, playing football with the other boys, defending his little sister or exchanging amorous glances with pretty Lisa...

With Tomboy, French director Céline Sciamma dares to tackle a rather difficult subject. Identity problems of a child trying to figure out for himself whether he would rather be a boy or a girl after all, are really not dealt with every day in cinema. In just a few days with a small crew, Sciamma has staged the film with a mixture of spontaneous improvisation and a fixed script. The almost complete absence of music and the very natural acting of the child actors give the film a very authentic feel, making the inner struggle that Laure/Michael goes through really palpable.

Zoé Héran, discovered on the very first day of child casting, delivers a truly great performance. Whether she's a boy playing lightheartedly with the other kids, or a girl becoming more and more aware of the consequences of her lies, the young actress never comes across as if she's just playing the part. Héran is a real stroke of luck for the film, which makes an enormous impression on the strength of her acting alone.

It's very pleasant that Sciamma repeatedly lightens up the very straightforwardly constructed dramaturgy with quiet humour. Especially little Malonn Lévana, who plays Laure's sister Jeanne, provides some enchanting and very amusing moments. It is exactly this mixture of drama and humor that conveys the film's difficult subject matter in a believable and lasting way. However, it must also be said that the staging can seem a bit unwieldy at times and will probably only be accessible to experienced program cinema-goers. And exactly therein lies the problem of the film. Because it's never quite clear who Tomboy is aimed at. For children, the story is certainly exciting, but the realization is too unspectacular to really hold the attention of younger viewers. Adults might be impressed by the acting of the actors, but will only be interested in the individual elements of the story to a limited extent. What remains is a small intersection, but one that will surely appreciate the film's high quality.

A sophisticated children's film that, with its interesting subject matter and great child actors, consoles over some of the lengths in the somewhat unwieldy production. For lovers of special arthouse fare and for parents who like to try with their children also sometimes on something more difficult food beyond the mainstream, quite recommendable!

Cinema trailer for the movie "Tomboy (Frankreich 2010)"
Loading the player ...