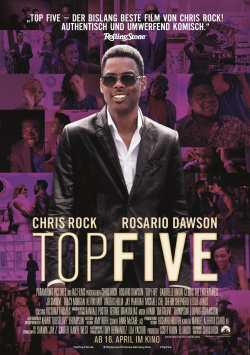 Andre Allen (Chris Rock) is one of the most successful comedians in the USA. His role as Hammy the Bear has earned him millions and he is also considered a guarantee for blockbuster comedies. But Andre, who started his career as a respected stand-up comedian, is tired of selling himself short. Instead of slipping into the bear costume again, he ventures into a serious subject with his new film. But the work about a Haitian slave uprising is not well received by the press and the public. Instead, his upcoming wedding to reality star Erica Long (Gabrielle Union) is the focus of media attention. He doesn't really realize how unhappy Andre is about this situation, despite his wealth, until charismatic New York Times journalist Chelsea Brown (Rosario Dawson) accompanies him for a day to conduct an in-depth interview about his career. It turns out to be an interview that could fundamentally change his life...

With Top Five, Chris Rock has directed a true passion project. In fact, the comedy seems to be a very personal film. After all, even Chris Rock, once celebrated for his successful stand-up programs and his irreverent Chris Rock Show, has sold himself well short in recent years in comedies like Kindsköpfe or What Happens When`s Happened. The story of the star who finally wants to be taken seriously again as a comedian and actor therefore doesn`t seem to be too far away from reality. And so it's not surprising that some moments in the movie seem a bit bitter. But especially in these scenes Rock often hits the nail on the head. As amusing as many moments may be, the entire film is infused with a certain sadness, especially in regards to show business, which is especially reflected in the character of Andre's bride-to-be, a reality starlet of the Kim Kardashian ilk. Expressions such as If it's not on film, it's not real or the realisation that she has nothing else in life except to be accompanied by the cameras is a bitter but very apt testament to a society dominated by superficial fame-seeking.

The conflict between success and artistic integrity, which is also the focus of the story, has already been very effectively realised in Birdman. Chris Rock, however, takes a very different approach to the subject matter than the four-time Oscar winner. In addition to the aforementioned moments in which the film reveals a disarming depth, Rock also relies more on dialogue marked by crude wordplay and some tastelessness, though only in two cases does it really overshoot the mark. Especially a disturbing sex scene, in which Cedric the Entertainer plays a leading role, was not really needed. While this scene is meant to highlight Andre's rock bottom, it could have been done a little more subtly.

Also, the scenes in which Andre visits family members and friends from before his success seem a little exhausting. These scenes, which seem improvised, offer little in the way of content and really only serve to add atmosphere, but are dragged out far too much for that purpose. Additionally, these moments will likely lose the very atmosphere they are supposed to build in the dub. The great strength of the comedy, on the other hand, are the long dialogue scenes between Andre and Chelsea, the moment in which Andre tries his hand as a stand-up comedian again after a long time, as well as the wonderfully self-deprecating guest appearances by Rock's colleagues such as Adam Sandler, Jerry Seinfeld or Whoopi Goldberg.

Top Five leaves a somewhat ambivalent impression overall. On the one hand, the dialogue is extremely clever and exposing, but on the other hand, the humor is sometimes too raunchy to match the successful aspects of the film. The atmospheric shots of New York, the good chemistry between Chris Rock and Rosario Dawson, as well as some really good gags at least console over some of the quite crude moments. Not quite a big hit, but as a bitterly evil look behind the beautiful appearance of show business, the film is definitely worthwhile. Worth seeing