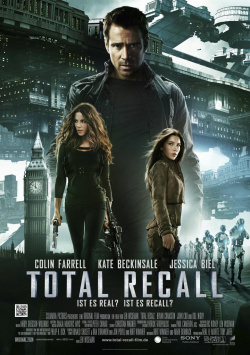 With his film adaptation of the short story We Can Remember it For You Wholesale by cult author Philip K. Dick, director Paul Verhoeven staged a real cult hit in 1990. The Arnold Schwarzenegger vehicle Total Recall was not only notable for brutality exaggerated to the point of absurdity, but also for plenty of irony and bitter sarcasm. Although Schwarzenegger's acting and somewhat dated effects have led some to call the film trashy, the sci-fi hit, which until recently was banned in uncut form in Germany, is a far more profoundly fun film than it might seem on the surface. That's why the announcement that Underworld director Len Wiseman would direct a remake didn't really bode well at first.

Because Wiseman dispenses with the very elements that made Total Recall a cult: its over-the-top scenes of violence and its biting irony. The story, on the other hand, remains the same in its basic structure: after large parts of the earth have been rendered uninhabitable by the use of nuclear weapons, people live in only two places: the United Federation of Britain and in the former Australia, now just called the Colony. This is where the common workers live, transported day by day through a vast tunnel system to their jobs in what used to be England. One of these workers is Douglas Quaid (Colin Farrell), who is really only saved by his love for his wife Lori (Kate Beckinsale) through the dreary daily routine. But one day Quaid makes a decision that will completely disrupt his life: he wants to join Rekall, a company that promises its customers the perfect memories, on an adventurous mind trip that brings adventure and spice into his life in a way that is actually harmless. But just before his desired memory of a life as a secret agent can be implanted, Rekall is suddenly stormed by the police - and Quaid becomes the hunted. He suddenly has abilities that are completely foreign to him, and everything that seems to be reality to him he is forced to question. But is the whole thing perhaps only a part of the mind trip. Is he perhaps still in the chair with Rekall, just reliving a real-life dream? Or is he really a key figure in a battle that could decide the fate of the entire world?

Unlike Verhoeven's film, Len Wiseman's version of Total Recall is not set on Mars, but entirely on Earth. As a result, there are no mutants here - apart from the legendary three-breasted prostitute who also makes an appearance. But those aren't the only differences Wiseman wants to use to set himself apart from the popular original. Not only does he avoid almost any form of humor, but his depiction of violence is much tamer than Verhoeven's adaptation of the short story. Of course, this robbed the film of some of its fun potential. But this 2012 version still manages to work well in its own unique way.

This is due in part, of course, to the technically first-rate visuals. Adorned with various borrowings from other genre representatives, from Verhoeven's original to Spielberg's Minority Report to Ridley Scott's Blade Runner, this gritty vision of the future consistently manages to intrigue the viewer and even evoke a little wonder here and there. Sure, the whole thing is not revolutionary. But thanks to some very original details, it's just fun to dive into this future world.

On the other hand, this reinterpretation of history also works, as Farrell makes up for the lack of irony of Schwarzenegger's role with a more crafted performance. Although effects and action dominate the proceedings, Colin Farrell doesn't let them completely upstage him, instead giving a very convincing performance as the man in search of total memory in both the physical and more dramatic moments. The real star of the film, however, is Wiseman's wife Kate Beckinsale, who delivers a performance as Quaid's hard-hitting wife that is not just visually worth watching. Beckinsale obviously had great fun playing a real villain for once, which, however, has the consequence that Jessica Biel remains completely pale next to her.

With some nice allusions to the current economic and political world politics and the then, nevertheless, slightly satirical decision to call Australia, of all places, a colony and Britain the actual ruling empire, Total Recall can then also convince in terms of content despite some rather shallow dialogues and predictable plot twists. And for all these reasons, one should try not to compare this version too much to Verhoeven's film. True, this is nearly impossible in some scenes that are clearly based on the 1990 film. But overall, Wiseman's version can please with its very own tone. If you're expecting a pure and completely over-the-top fun movie like the original, you'll definitely be disappointed. But if you're just expecting solid sci-fi action with high show and entertainment value, you'll be well served here. Worth seeing