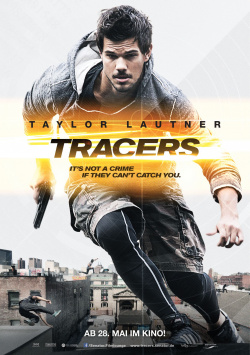 Cam (Taylor Lautner) is one of the best bike messengers in New York. He knows the street canyons like the back of his hand and always manages to be faster than the competition with sometimes extremely reckless maneuvers. But it doesn't really make you rich, especially when you owe the wrong people a lot of money. Ideally, Cam would just like to disappear for a while. But then he meets a group of parkour runners led by tough Nikki (Marie Averopoulos). Immediately, he's intrigued by the world the group inhabits. When he meets their charismatic leader Miller 8Adam Rayner), Cam allows himself to be persuaded by him to participate in not quite legal actions, which can easily earn good money. To pay off his debts and impress Nikki, Cam goes along with it, unaware that he's getting himself into even bigger and more dangerous trouble...

Tracers is a somewhat ambivalent affair. Neither is Taylor Lautner a particularly good actor, nor is director Daniel Benmayor a compelling storyteller who knows perfectly how to captivate his audience. A very predictable plot, dialogues dripping with clichés and the wooden acting of Taylor Lautner are the perfect ingredients for a very bad movie. But that's not what Tracers turned out to be. Because as soon as the focus is not on the story but on the action, the thriller offers really good entertainment. The parkour scenes are great, with New York simply providing the perfect backdrop for this extreme sport. Benmayor and his team have chosen some really atmospheric locations, such as a discarded freighter, in which the parkour runners, some of them professional, can perfectly demonstrate their skills.

The somewhat forced crime storyline also works surprisingly well. Screenwriter Matt Johnson won't win any awards with this one, but aside from the less than sparkling dialogue, he pushes the action along at a pleasantly fast pace. In conjunction with the action-packed production, this ensures that the audience at least won't get bored. If they would have left out some of the rather unintentionally funny scenes, in which something like a dramatic story arc is supposed to be built up, Tracers could have been a really good fun movie. So the whole thing is still decent entertainment with a lot of good show values, in which fans of films like Premium Rush may well enjoy.

So if you can overlook the marginally recognizable acting talent of Taylor Lautner, the less original dramaturgy and the heavy pathos-filled dialogues and want to enjoy really good parkour stunts in front of the atmospheric backdrop of New York, you get absolutely solid entertainment cinema offered here. And for this there is then also only with minimal deductions a satisfied: Worth seeing!