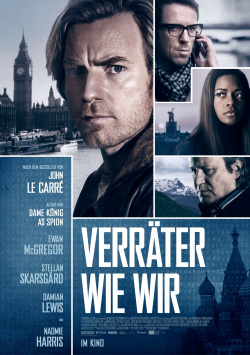 A romantic dream holiday under the palms of Marrakech was supposed to help save the marriage of Oxford lecturer Perry (Ewan McGregor) and his wife, lawyer Gail (Naomie Harris). But when that doesn't quite work out, Perry is left alone after a failed dinner and makes the acquaintance of Russian Dima (Stellan Skarsg&aring;rd), who makes the Brit forget his troubles for a few moments during a wild night of partying. But appearances are deceptive, for Dima has a dangerous plan: he wants to defect to Britain, and Perry is to help him do it. As a money launderer for the Russian mafia, Dima has information that should be of great interest to British intelligence - and Perry is to hand it over to them. Reluctantly, he agrees to this supposedly simple errand, believing it will save the lives of Dima and his family. But the deal doesn't go down as easily as he believed. Rather, British secret agent Hector (Damian Lewis) makes him realize that he and Gail have now been targeted by the Russian mafia themselves and must help Perry continue to mediate between the secret service and Dima if they want to get out of this in one piece. And suddenly the couple become pawns of international intelligence agencies in the midst of a deadly game of cat-and-mouse.

Traitor Like Us is another film adaptation of a novel penned by espionage specialist John le Carr&eacute; after The Eternal Gardener or Queen, King, Ace, Spy. However, director Susanna White's (A Magical Nanny) thriller has to compete less with previous big-screen adaptations of le Carr&eacute;s novels and more with Susanne Beer's recent TV miniseries The Night Manager. For Beer's mini-series has shown that it is the fleshing out of interesting characters that makes le Carr&eacute;s sometimes rather similarly knitted stories so exciting and involving. Of course, there is more time for this in a TV production lasting several hours than in a two-hour feature film. Here the characters run the risk of becoming flat clichés. This can be largely avoided in Traitors Like Us, but Perry, played by Ewan McGregor, lacks the multi-layered depth that made Tom Hiddleston's Night Manager a very interesting character.

Susanna White nevertheless manages well to build up a suspenseful scenario in which the lines between good and evil are not clearly drawn. Her film is solid entertainment that never gets boring, though it doesn't offer any real surprises either. Often, as a viewer, you already know exactly how a scene is going to end (this is especially true for an important moment at the end of the film) when it has just begun. The atmospheric locations and some successfully constructed moments of suspense can't hide the fact that dramaturgically the thriller only offers very conventional fare.

What the film ultimately benefits most from is the very good cast. White has assembled a first-rate ensemble that can solidly cover overly worn-out clichés. Damian Lewis and Stellan Skarsg&aring;rd in particular leave a sher good impression. The performance of the actors and the good direction make Traitors Like Us a thrilling thriller that doesn't revolutionize the genre, but offers very good and entertaining entertainment to all those who like solid spy thrillers. For this there is a very clear: Worth seeing!