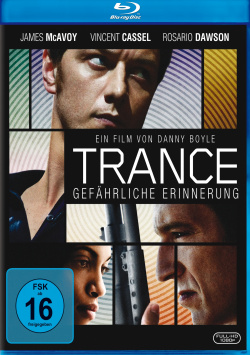 Film: After his Oscar win for "Slumdog Millionaire" and the Oscar nominated drama "127 Hours", director Danny Boyle is now back with a film that won't earn him any big prizes, but that reminds us in a very entertaining way why Boyle once achieved cult status. "Trance - Dangerous Memory" is a cleverly constructed thriller, which at the beginning seems to tell a quite ordinary film noir story, but in the course of the plot it has more than a surprise in store to steer the action in a completely different direction.

Everything begins with the attack on an auction house, in which the young auctioneer Simon (James McAvoy) is currently auctioning off an extremely valuable Goya. Simon manages to get the valuable painting to safety, but then he gets into a fight with Franck (Vincent Cassel), the leader of the band of robbers. After he knocks him out of action with a blow to the head, Simon loses not only his reflection, but also his memory. After he is discharged from the hospital, Franck and his people already expect him. Because Simon planned the robbery together with the gangsters - only the blow to his head was not part of it. Now that Simon can't remember where he hid the Goya, Franck sends him to the attractive hypnotherapist Elizabeth (Rosario Dawson) to help him regain his memories. But some locked doors should not be opened...

"Trance - Dangerous Memory" is a classic boyle in the best sense of the word. The kaleidoscope-like thriller doesn't quite reach the cult potential of Boyle's early works like "Trainspotting". But it can achieve a lasting effect in any case. He doesn't only succeed in this by leading the plot in a new direction over and over again, but also by fundamentally changing the characters in their nature and motivation. Also through the interplay of music, editing and intensive visual language, Boyle succeeds in creating a real intoxication in the viewer, which makes the film stay in his mind for a long time.

With a straightforward, rather traditional staging, the story probably wouldn't have worked out so well on its own and would have seemed completely untrustworthy, especially towards the end. However, Boyle has managed to create a thrilling puzzle out of the story, whose composition is not only extremely exciting, but which at the end also results in a picture you wouldn't have expected, despite a certain predictability. The fact that this works out so well isn't solely due to the technical aspects of the movie, though. The actors also make a considerable contribution to this, precisely because they have to create their figures in a very multi-layered way. And they all do that, especially James McAvoy, with bravura.

"Trance - Dangerous Memory" is a great thriller that offers the best entertainment on many levels. It's a visual trip, that at times disturbs, at other times offers amazingly amusing moments, that at times is dark and brutal, at other times sexy and playful. The fact that Boyle has managed to tell a rather ordinary story in such an original and stirring way only allows one possible conclusion: absolutely worth seeing! And another tip: avoid letting yourself be told too much about the plot's applications - especially about the ending - as best you can. Because in the case of "Trance - Dangerous Memory" the following applies: the less you know beforehand, the more intense the effect of this film!

Picture + Sound: For Danny Boyle sound design always plays an important role. This is no different with "Trance - Dangerous Memory". It is therefore all the more pleasing that this aspect is also shown to advantage in the home cinema version thanks to the successful DTS mixing. The sound scenery is very lively, whereby dialogues, music and sound effects are very well coordinated. The visual implementation is also absolutely convincing. The picture is clean, the sharpness of detail is excellent and the colouring is extremely atmospheric. But there is a clear one: Very good!

Extras: The Blu-ray has some good bonus features to offer. We start with seven dropped scenes (approx. 16:33 min.), in which especially a longer sequence has really interesting and worth seeing moments to offer. Four short documentaries (together approx. 33:59 min.) then deal quite comprehensively with the making of the film, the editing, the visual style and the working method of the director. Danny Boyle then gets another featurette (approx. 14:56 min.) in which the viewer is given a brief overview of the filmmaker's creative work to date. But this seems more like an appetizer, as his previous films simply can't be adequately illuminated in a quarter of an hour. Nevertheless a very interesting short documentary.

The probably most unusual extra is the short film "Eugene" (ca. 13:07 min.) by Spencer Susser. The story of a man who comes into possession of a very special laptop has nothing to do with "Trance - Dangerous Memory", but is still really worth seeing.

Fazit: "Trance - Dangerous Memory" is an intense visual trip, which sometimes disturbs, then again offers astonishingly amusing moments, sometimes darkly brutal, then again sexy and playful. With his convincing cast and a surprisingly loaded script, Boyle manages perfectly to tell a rather ordinary story in an original and stirring way. On the Blu-ray the film presents itself in a very good audiovisual implementation and the bonus material is also convincing. But there is a very clear one: Absolutely recommendable!