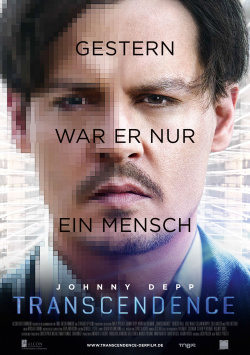 The rapid advances in technology bring many benefits to us humans. But even though we can now get our information faster, medical research constantly has new important achievements to report, or some crimes that have long gone unpunished can finally be solved with the help of new computer-based methods, technology also scares many. After all, it also allows for constant surveillance, promotes social isolation, and is often used as a weapon. For Dr. Will Caster (Johnny Depp), however, computer technology is a blessing to mankind, despite all the dangers. He and his wife Evelyn (Rebecca Hall) are on the verge of revolutionizing the field of artificial intelligence. A computer system imbued with human emotions and thus able to reflect on its own should help make the world a better place.

The members of a radical underground organization see it differently. To them, the visions of people like Will Caster are the beginning of the end of humanity. And that's why they're doing everything they can to stop his work. When Will is hit by a radioactively contaminated bullet, the extremists seem to have achieved their goal. But with the help of her friend Max Waters (Paul Bettany), Evelyn manages to successfully end Will's experiment. To do so, she allows her dying husband's mind to merge with the new computer system. The artificial intelligence that results exceeds the scientists' wildest expectations with its capabilities. But in her excitement at this professional success, and in her joy at having Will with her again, at least in this way, Evelyn fails to see the danger her invention threatens to become.

Cinematographer Wally Pfister makes his ambitious directorial debut with the science fiction thriller Transcendence. Yet it is the approach of the story and the moral questions it raises that are really interesting. The questions of what happens when man loses control over the technology he has created, or what achievements justify giving up one's identity, provide a good basis for exciting cinematic entertainment. If this is then also stylistically implemented first-class and can boast a great cast, then really nothing can go wrong.

Too bad only that screenwriter Jack Paglen with his first filmed screenplay a little over. Not only should a story like this have been told a little more cleverly and polished. It also should have had a bit more of a suspense-oriented plot structure in order to adequately exploit the potential that lies at the core of Transcendence. But unfortunately, Paglen's script gets lost too much in long-winded inconsistencies and doesn't follow the path he has laid out consistently enough to be completely convincing even after the very successful beginning. Where captivating suspense and a thrilling dramaturgy should prevail, unnecessary lengths and a too conventional plot dominate the action. This is really a pity due to the many successful aspects of the film.

Dennoch: the predominantly bad reviews that Transcendence has just received in the U.S., Pfister's directorial debut has not deserved. After all, even if the film could have benefited from tightening up some scenes and fleshing out the story a little more cleverly, the futuristic techno-thriller is neither badly acted nor unbearably dull. The few obvious special effects are well executed and the action, which is used a little too infrequently, is handsomely staged. In addition, Pfister succeeds very well, especially at the beginning, to build a subliminally threatening atmosphere, through which a decent level of tension can be maintained even in the somewhat quieter moments. Sure, Transcendence may be miles away from the class of a Christopher Nolan, whose regular cinematographer is Wally Pfister. But the film is far from the artistic mega-flop that some see it as. If you're not expecting a lot of pace, non-stop action, or a great intellectual challenge, you'll get solid entertainment cinema here that not only looks good and is solidly acted, but also has some very good plot elements. And for that, with minor deductions, there's an absolutely satisfied: worth seeing!

Cinema trailer for the movie "Transcendence (USA 2013)"
Loading the player ...