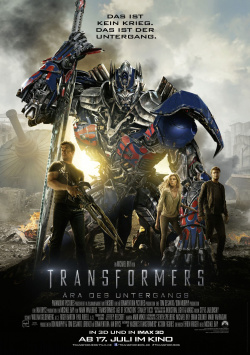 Several years have passed since the Autobots and the Decepticons fought their all-important battle on Earth, reducing Chicago to rubble. The fact that the Autobots are actually the good guys protecting us humans from evil aliens doesn't matter at all to those left behind by the victims. CIA agent Harold Attinger (Kelsey Grammer) takes advantage of this sentiment: he sets up a special unit to hunt down and destroy all Transformers. At least, that's what he pretends is his goal. Because actually, Attinger is working with another alien robot who will give him access to powerful Transformers technology in exchange for Attinger getting him Optimus Prime. But he remains without a trace after the events of Chicago. That is, until tinkerer Cade Yaeger (Mark Wahlberg) buys an old truck and, while tinkering with what he thinks is a pile of junk, discovers that he has the leader of the Autobots in his barn. And so it's not long before Attinger and his men are hunting down not only Optimus Prime, but also Cade and his daughter Tessa (Nicola Peltz). But this is just the beginning of a new gigantic battle that could finally usher in the era of doom for the humans.

Actually, Michael Bay only wanted to direct a trilogy of Transformers movies. But after the third installment grossed over $1.1 billion worldwide despite the usual negative reviews, Bay wasn't ready to let the franchise go after all. And so he now delivers the start of a second trilogy with Transformers: Era of Doom. The only really big changes are in the cast. Shia LaBeouf is just as little back as Josh Duhamel or Tyrese Gibson. Instead, Mark Wahlberg, Nicola Peltz (Bates Motel) and newcomer Jack Reynor (The Delivery Man) now get to fight their way through Bay's material battle alongside Autobots and other Transformers.

In addition to the new cast members, there are of course a few new Transformers, with the Dinobots likely to attract the most attention - despite only being seen briefly towards the end of the film, which at almost three hours is far too long. Other than that, though, Bay remains true to his winning formula despite all the critical scolding. Neither he renounces his obligatory 180 degree tracking shots, nor landscape shots in over-stylized postcard idyll or lascivious glances at barely covered buttocks of the attractive actresses. On the other hand, he has toned down the infantile humour of the last films, which had taken on almost unbearable proportions in the second part. There are still a few scenes that are obviously intended to amuse a very young audience, but overall such moments are kept within tolerable limits.

Anyway, the special effects and action sequences are clearly in the foreground in the Transformers movies. And no matter what you may think of Bay and despite the script, whose lack of quality really no one can deny, it can not be denied in the fourth rehash that the director has delivered here again first-class. In many fast-paced sequences, in which once again entire cities are transformed into rubble, Michael Bay offers fans of the series exactly what they expect from him and what they want to see in a Transformers movie. And anyone still expecting something different in the fourth film after the first three installments has only themselves to blame, to say the least.

Admittedly, objectively speaking, Transformers: Era of Doom is not a particularly good film. It's at least thirty minutes too long, unconvincing acting-wise (aside from Stanley Tucci, who seems to be able to pull something out of even a screwed-up script), and dramaturgically devoid of any form of originality. And yet, as pure popcorn fun, the whole thing actually works very well. However, you might want to trade in your intellect for a large portion of popcorn and Coke at the counter before entering the theater, because as soon as you start thinking too hard about the on-screen hubbub, your enjoyment of this latest appearance by Optimus Prime and co. will be significantly diminished quite quickly.

Those who liked the first three Transformers movies not because of but rather in spite of Shia LaBeouf, just want to see more Autobot action and finally learn the whole truth about who or what really wiped out the dinosaurs, are guaranteed to have a really good time with Era of Doom. But if you belong to the unteachable ones, who still hope that Michael Bay has directed a movie not only for the eyes, but also for the brain, you will wish at the latest at the first longer dialogue scene to be able to transform yourself into a car, in order to jet out of the cinema as fast as possible. Therefore: For fans a feast and therefore also for the target audience absolutely worth seeing!

Cinema trailer for the movie "Transformers: Era of Doom (USA 2014)"
Loading the player ...