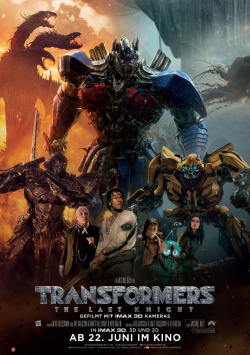 After Lockdown's attack on Earth, humans have apparently had enough of the Autobots and Decepticons. A special task force has been formed whose mission is to find and destroy all Transformers on Earth. Cade Yeager (Mark Wahlberg) has sided with the Autobots and is an outlaw on the constant run from the government. When he once again tries to save an Autobot, the latter hands him an old medallion. And suddenly the events come to a head: Cade is whisked to England by the mysterious Lord Edmund Burton (Anthony Hokins), where he learns not only surprising things about the history of the Transformers, but also about his own destiny. But there isn't much time to process this. For Optimus Prime, while trying to save his home of Cybertron, has unleashed an evil force that could lead to the destruction of Earth. Along with Bumblebee, Lord Burton and young history professor Vivien Wembley (Laura Haddock), Cade must now try to find an ancient mystical power to save Earth.

Although largely panned by critics, Michael Bay's first four Transformers films managed to gross a total of over $3.7 billion at the worldwide box office. And so it was little surprise when Transformers: The Last Knight, part 5 of the franchise, was announced. And it's also little surprise that this fifth film once again offers exactly what made the first four films so successful for fans and so bad for critics. The story is completely overloaded, the characters are walking clichés and the dialogues are more than flat - even if Michael Bay once again seems to think that this is not noticeable when he mostly lets his actors shout them out loud. The humor is extremely infantile and will probably only really amuse very young fans.

However, there are of course positives here as well. The effects are simply terrific, even if they don't come off particularly well in the frantically edited action sequences. Anthony Hopkins, who is actually only there to tell Mark Wahlberg alias Cade the story of the Transformers on Earth, actually manages to make even some very weak scenes absolutely worth watching. So at the very latest, when Cade gets to England, the film takes on a pleasingly high entertainment value. Of course, there are again many moments that can't exactly be called great cinema. Still, the whole thing here is a lot of fun and actually makes you forget some of the film's many weaknesses. And somehow it's also funny that Michael Bay manages to get a little bit of action out of even a dignified sport like polo.

In the last twenty minutes Bay really lets it rip. It's just a shame that before that, you have to endure some really bad clichés, lame gags and muddled plot elements for far too long. Transformers: The Last Knight is not the worst part of the series. But once again, Bay fails to adequately exploit the potential of this franchise. With this supposedly being his last Transformers film as director, we can't wait to see if a little fresh blood in the director's chair will do the series some good - or if Bay will also impose his own unique style as a producer, which works financially, but unfortunately not artistically. And so the bottom line for Transformers: The Last Knight is: absolutely worth seeing for fans. Who, on the other hand, could do little with the series so far, will not change his mind after this machination - on the contrary!

Cinema trailer for the movie "Transformers: The Last Knight (USA 2017)"
Loading the player ...